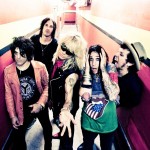 Former Hanoi Rocks vocalist Michael Monroe recently announced that he will enter the studio this November to record the follow-up to his 2019 album One Man Gang. A spring 2022 release is expected.

In a statement on Facebook, Monroe wrote: "In about 2 weeks, at the beginning of November, we're going to start recording the new Michael Monroe album! It's going to be released in the Spring 2022! "