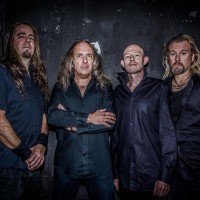 German death thrashers Messiah confirmed that their vocalist Andy Kaina has decided to leave the band to focus on his personal life. Andy was part of the band in two different time periods, from 1989 to 1993 and from 2018 to 2021.

Statement from the group: "This summer, Andy told us that he wanted to focus more on his personal life. In other words, Andy is leaving Messiah. He was our singer from 1989 to 1993 and from 2018 to the end of 2021, so he was a part of the band for 8 years. We're proud and grateful that we could record the albums Choir Of Horrors, Rotten Perish and our new album Fracmont together. We part as friends and thank Andy for his time with Messiah and wish him all the best for his new chapter!

"He will perform his farewell show on November 20 in Langenthal at Old Capitol (Switzerland). Special guests: Requiem. DON'T MISS IT, let's say goodbye to him with a big party! See you there!"

"We will and are already intensively looking for a successor and hope to present him to you soon. We are extremely motivated and look forward to everything the future holds for the band and also to the already planned live shows!"