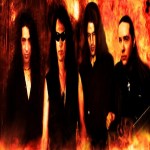 David Shankle, the mastermind behind the David Shankle Group, confirmed the passing of their former drummer Michael McCarron. He was 56 years old.

David Shankle's statement as follows: Absolutely devastated one of my best friends, Michael R McCarran, I am in shock before I can even speak my words - yet to gain my composure - of my best friend, musical friend, that I've known for over 40 years of my life is gone. My heart is completely shattered. He also played drums on the track the Hitman from the last DSG CD Still a Warrior and has done pre- production with me on every DSG record I've ever done alongside Jay Walsh. You will truly be missed and love you my brother."