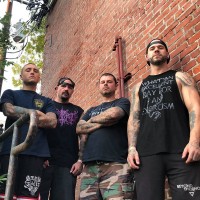 Pathology on the new track: "We're stoked to finally share another track from the new album! "Dirge For The Infected" shows the full range of Pathology's music, from brutally heavy to fast and complex along with everything in between. Take a journey with us on this new track and prepare yourselves for the new album The Everlasting Plague!"