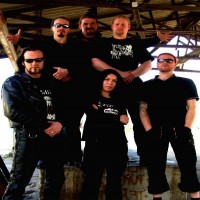 A full decade after their last album Nemesis Noctura, during which the band remained active on stage but went through several line-up changes and did not record any new material, Eminenz return with their much-anticipated seventh full length, entitled Diabolical Warfare. Prior this Friday's official release, the band offer in listening the entire outing via the Black Metal Promotion YouTube channel.