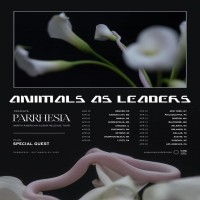 In support of their upcoming album release Parrhesia, due out on March 25th via Sumerian Records, Animals As Leaders announce a set of U.S. shows in April. 'The Parrhesia Tour’ will be hitting 19 cities and will feature two special sets - one of which will feature the new album in its entirety. Tickets go on sale Friday, January 21.