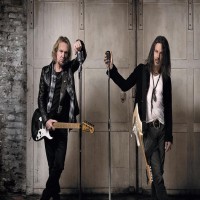 When asked about their current West Coast tour, Kotzen said: "What happened was it was all just by timing. Nathalie [Dufresne-Smith, Adrian's wife] and Adrian came into town, and Adrian said, 'Hey, we're gonna be there for a couple of months. You wanna write some more songs?' And we did get together and we did about seven things that are in the works; we have some demo stuff that are in the works. And then we started thinking, 'Man, we're here. Why don't we play?' Julia was in the house and we were talking about it. And it just kind of - boom. It just made sense. 'Let's go. Call Bruno.' And we put it together. It was real easy."

Smith said: "We started writing with a view to doing another album, and then we got sidetracked on dates. Like Richie said, we've got six or seven things. It's just taking where we left off with the EP - just writing as we do. I don't wanna change the world. I just wanna make good rock music. It's n there, and you've just gotta do it. You just have to do it, really. It's one of those things."