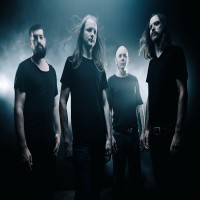 "Death Grip", the third single/video from Black Lung's upcoming studio album Dark Waves, has surfaced online. The release will see the light on May 27th through Heavy Psych Sounds.


Says the band: "Death Grip" is a critique of the funeral industry and those who profit off grief and death. It's not a secret that funeral homes often take advantage of people at their most vulnerable, charging exorbitant prices for caskets and services. We decided to invite our good friend Shawna Potter (the frontwoman of War On Women and a champion of progressive values) to write and sing the chorus, as well as star in the video. My vision for the music video was a 70s style occult horror, equal parts creepy and campy, and I'm pretty proud what we pulled off with a shoestring budget. We see our antagonist, "The Death Capitalist", relishing in his wicked business, until Shawna's character, "The Witch of Justice", kidnaps him. She takes him to her lair, where her acolytes (the band) mete out his punishment: torture by the power of rock n' roll. It was a ton of fun to create and Jordan Miller (cinematographer/Gypsy Cab Productions) really helped us achieve our vision with his expertise in horror filmmaking."