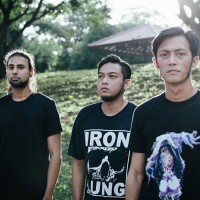 Singapore-based grindcore operatives Wormrot premiere three new singles via a cinematic music video, which was directed and produced by Leonard Soosay and Michelle Quek. The tracks are taken from the band's forthcoming album Hiss, due out on July 8th.


Statement from the band: "Exciting news! We've been working hard behind the scenes to bring you a new music video trilogy for three previously unheard songs from our new album Hiss - "Grieve", "Weeping Willow" and "Voiceless Choir".

"Combining three songs to tell a single continuous story, this trilogy portrays an unnamed protagonist (played by Tia, who’s just a natural bad ass!) exacting vengeance on the corrupt cops (played by us) who plotted the murder of her lover. We pay tribute to '70s Japanese crime movies and two of Singapore's own TV series 'Triple 9' and 'Crimewatch' which we grew up watching.

"Some bits are serious, some bits are silly, but all in all, it’s just fun film-making. This is our first time ever doing a narrative style music video so we hope you all enjoy watching it as much as we did filming it. Let us know what you think in the comments!"