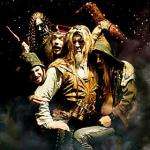 In a shock development, Avantgarde metallers Arcturus have decided to disband after a highly successful tour of Australia.

Local tour promoters Just Say Rock Productions broke the news to patrons of the concerts via e-Mail, stating their reasons: "The band just thought that the time was right, the moment had come and that due to their tour of Australia being so successful they wanted to go out on top...[Arcturus believed] their [recent] Australian tour was one of their greatest highlights and they rated their Melbourne show as one of their all time memorable all round events."

"Yes we are splitting up, there is no more time for all of us, as everyone is extremely busy. But there have been some killer 16 years or so :-)

See you next time with Mayhem or Dimmu, and those bands are not likely to split up any time soon ;-) ."

Another fan post on the page reads: "Vortex (vocalist Simen "Vortex" Hestnæs) announced that the Melbourne show was their last, I spent alot of time talking to all members of the band and they all gave me the impression that they were somewhat relieved it was coming to an end. I feel totally blessed to have been able to spend a week with them and be at their last ever show. Sadly they all said that a reunion is very unlikely."