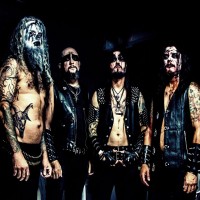 Power From Hell are all set to release their next full length instalment, entitled Shadows Devouring Light, on September 30th via Debemur Morti Productions. It was recorded at Gringhouse Studios in Rio De Janeiro in December 2021. Mixed and mastered by Kleber Oliveira at Dark Paradise Recordings in Sao Paulo.

Composer and front man Sodomic comments on the new musical path: "Silence" represents the new era of our music, but at the same time a portion of the old Power From Hell sound is still there. Those who kept up with the band in the last years will notice that. This song has a rather complex approach in terms of guitar riffs, but it sounds simple and straightforward at the same time. Therefore, it seemed like the right choice to be the first track revealed from the album. The role of this composition is to prepare the listener sonically and lyrically for the rest of Shadows Devouring Light. Everything is linked to the song title "Silence". Silence is there at the beginning, and it will be at the end of our experience on this planet. That is why we chose it to be the album's opening song.