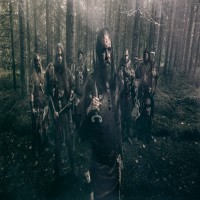 Swedish folk metal ''troll'' crew Grimner have shared their brand new single ''Helvandrarna'' (The Hel-Walkers), which you can find below. At the same time Damien Terry, who also plays bass and fronts the crust/death metal quartet Envig, has been nominated as the band's new bassist/vocalist.

The band comments about the new song: "This song turned out to be a unanimous favourite among the members of Grimner, much due to the fact that it's a relentless track that pounds and hammers all throughout it's entire duration. It really stands out on the record!"

The band continued about the bassist: "Hark, brothers and sisters! It is time to celebrate, for today we unveil the newest member of the wild horde that is Grimner! As we searched far and wide for fresh blood to join our ranks, we soon found a worthy warrior on the plains of Västergötland. A mighty spear wielder without equal, and with a growl that could scare away the fiercest bear or wolf, we invited him to the closest mead hall to drink the night away. We knew this warrior from before, and it didn't take much proof of skill before we asked him to join us, as we were aware of his battle prowess. This is Damien Terry, our long time friend and brother who also plays bass and fronts the crust/death metal quartet Envig. In fact, you may already have heard him in Grimner before, as he did some choirs way back on our first album Blodshymner, and he has also done some additional growling on our upcoming album. A very skilled bassist and vocalist who, from now on, will take on the task of tearing up the bass and lay backing vocals in Grimner. Give him a warm welcome! We look very much forward to raiding with you, brother!"