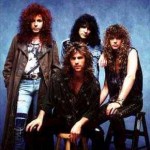 8 years after the release of their latest record Better Days Comin, American rockers Winger have announced on social media that their seventh studio album is currently being mixed for a 2023 release (exact date TBA). Earlier Kip Winger shared a photo and video of him and a mixing engineer in the studio, and he included the following message: "Mixing #WingerVII!"