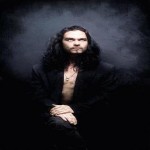 On July 8, 2009, founding member and original Crimson Glory frontman Midnight passed away at 3:30am surrounded by his family. An official statement reads as follows:

On July 8th, 2009 the world lost one of its greatest singer/songwriters. Founding member and original Crimson Glory frontman Midnight (John Patrick McDonald, Jr.) passed away peacefully, (in true Midnight form on an eerily cloudy, full moon-lit night) at 3:30am with his family by his side. He was 47 years old.

A memorial service will be held on Saturday, July 11th at 6:30pm at Siesta Key public beach (just south of main pavillion). This celebration of Midnight's life will be open to all who wish to attend. The band has released the following statements:

"Midnight was a very special soul with a beautiful heart...

To try to describe his many gifts through the limiting restraints of text and typeset is like trying to describe a thousand rainbows to a blind man who never learned to count. His mind was both extraordinarily beautiful and enticingly frightening, an indescribably mysterious place from which came some of the most brilliantly creative and soulfully poignant lyrics in the history of heavy metal. He was not always understood, but his talents were undeniable and transcended far beyond the bounds of our weaker imaginations.

As is the case with all truly great artists, Midnight was hounded by his demons... but he put them to work, using them to pull back the curtains of his cosmic wonderland and reveal the pieces and parts that made him who he was: the soft vulnerable child, the eccentric and maniacal genius, the soaring passionate believer, the charming and mischievous imp, the wistful dream weaver... discovering Midnight was like discovering a new reality for us; we knew from the moment we first heard him sing that he was something special, and we all feel honored that he shared himself not just with us, but with the rest of the world.

Midnight's voice was truly unique; he had such an emotional, magical, mystical quality that most singers never have or come close to achieving. That voice took all who heard it through highs and lows, through triumph and suffering; every word, every note touching, reaching deep inside and commanding response and feeling. He was a great influence for metal singers and will continue to be for many years to come.

Despite his personal demons we always loved him and hoped that one day he would get well. We will miss him dearly. He was one of us...our friend, our brother. Midnight was and will always be the singer for Crimson Glory. He is at peace now; he will always live in our hearts...he is forever."

Guitarist Jon Drenning: "Midnight and I shared so much together over the years; dreams, goals, visions, creativity... We would often daydream for hours upon hours about how we would make the most amazing music together that would "Transcend" the world. We were determined to make an impact like no other and wanted create a legacy that would be everlasting... Despite our disagreements, I loved him deeply and will miss him profoundly. We had a contentious, yin-yang type of relationship, but we respected each other's ideas, talents and creativity, and loved each other dearly; we were brothers 'til the end. Midnight was a kind, generous, spiritual, beautiful, passionate, eccentric, mysterious, stubborn old soul with the voice of both an angel and a lion. Truly, he was a rare individual with an enigmatic, angelic vioice who had a great influence on many of today's well-known and yet-to-be-known metal singers. There have been many great singers throughout the years in the metal genre, including several who have tried to copy Midnight's uniquely moving, intensely emotional style, but there can be - and will only ever be - one Midnight. He was a once-in-a-lifetime singer, one-in-a-billion, a star among stars... Indeed, the world has lost a great singer, songwriter, painter, poet and friend... but his spirit lives on in each of us who knew and heard him, as well as for those yet to discover his creative genius. In death you live again, my Brother, my friend. It does not mean the end; it never really ends..."

Guitarist Ben Jackson: "Words cannot express the sadness I feel today over the loss of my dear friend Midnight. Having been friends with Mid for the last thirty years has provided me with memories I will surely treasure for the rest of my life until we hopefully will meet again. Together we made music, shared laughs and good times, traveled the world to faraway places and lived life with passion. He touched many with his unique gift and was universally loved by his many friends and fans. A gentle genius and a sweet, sweet soul. I will miss you so much buddy! I love you!"

Drummer Dana Burnell: "Today the world lost an incredible singer and songwriter. I lost my band mate, my friend... my brother. I've known Midnight for over 30 years; he was the gentlest, kindest and most caring person I've known, and I loved him very much. Midnight only wanted good for everyone, he was a good soul. Knowing he is at peace now brings me great peace. I love him and will forever miss him."

Bassist Jeff Lords: Jeff's comments will be forthcoming. At this time we respect his request to gather his thoughts.