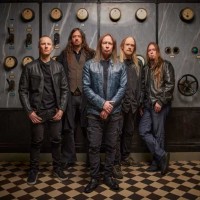 STRATOVARIUS guitarist Timo Tolkki has reportedly told the Finnish daily newspaper Ilta-Sanomat that keyboardist Jens Johansson will definitely continue to be a member of the band once the group have sorted through their current personnel "crisis". The situation with the band's drummer, Jörg Michael, however, is still up in the air. According to Tolkki, Michael's wife is due to give birth to twins in January and it is not presently clear if the drummer has enough interest and motivation to continue playing with the group.
While he has yet to publicly reveal the cause of their disagreement (due to "legal reasons"), Tolkki has indicated that the biggest problem in the band exists with vocalist Timo Kotipelto, with whom the guitarist is said to have a "very strained" relationship.

When asked by a fan on his guestbook if there are any plans for STRATOVARIUS to play shows in America, Kotipelto responded, "Good question. I don't even know if I am in the band anymore."

In late October, STRATOVARIUS signed a three-album contract with Sanctuary Records in what was said to be the biggest-ever deal completed for a Finnish rock band (reportedly worth over $3.5 million dollars).