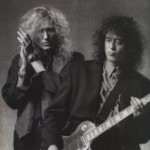 More than 20 years has passed since the release of the album of the magic duo of David Coverdale and Jimmy Page. Both men were already renowned artists in the world of music. The best guitar player of all time and one of the most iconic lead singers of rock history joined forces to release a record and possible world tour.

At the time Jimmy Page wasn't musically active as it was expected. After the disbandment of Led Zeppelin he was only able to release three albums: two with super group The Firm, and one solo album entitled Outrider. On the other hand, David Coverdale had just disbanded Whitesnake for "technical reasons". One of the reasons was that, at the time, factors such as videos, make-up and press influence were becoming more important than talent itself. The former lead singer of Deep Purple decided to call it quits and disband the band, only to return in 1994.

The executive of Geffen Records, John Kalodner, wanted both artists to perform and compose an album together. Page agreed to a meeting with Coverdale, and both got along very well indeed. After the meeting, the two artists agreed to compose an entire album and tour in order to promote the future album. The chemistry was really good and the composing process finished with over 50 tracks. One of those tracks composed was "Shake My Tree", which was based on a guitar riff composed by Jimmy Page that was rejected by the rest of his band mates in Led Zeppelin, for what ended up to be their last album together entitled In Through The Out Door, released in 1979. 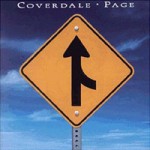 The album itself was titled Coverdale/Page, and was released in 1993. The album was very successful commercially with hits such as "Shake My Tree", "Take Me For A Little While", "Pride And Joy" and "Absolution Blues". One of the biggest criticisms to the album was the similarity to the style of Led Zeppelin, which resulted in Coverdale/Page becoming the object of comparison with Led Zeppelin's successes. Technically the record presents both artists in very good shape, some great guitar riffs of Page in "Take Me For A Little While", "Absolution Blues", "Feeling Hot" or "Don't Leave Me This Way". Coverdale's vocal performance is in great shape, delivering perhaps one of his best album performances of the last 20 years. The record mixes several musical styles such as hard rock, blues rock and heavy rock. Lyrically, the record is based in human relations: it centers it's focus on love, affection and betrayal. 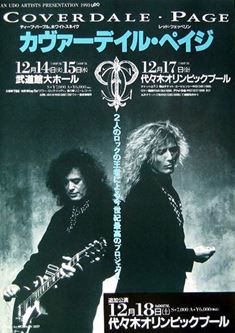 Although the album was a commercial success, the supposed world tour never happened. For unknown reasons the world tour became shortened to a few shows in Japan. In an interview Coverdale said: "The objective for the 'Coverdale/Page' project was touring around theaters, festivals and going straight to stage but nothing happened, nothing came from Jimmy's manager when the album was released. It was one of the most frustrating moments of my musical career."

In 1994, Whitesnake reformed and Page joined forces with Robert Plant for their No Quarter's release. Independently of the lack of touring and frustrating times that the two musicians had, both saw the experience as very positive. Personally, I think the album presents good hard rock tracks and the overall musical outcome is very positive. In a scale from 0 to 10, I'd give it an 8. It was released in the beginning of the 90's, the worst decade for music, but still they were able to leave a great rock album with some flops but in general a very credible piece of music. The legacy is a good one of course, both men were available to compose something different, and they did in most of the album. It's not every day that two icons of music join forces to make an album and end up being "snubbed" by managers when the opportunity to tour comes to the table. It's a mandatory album for any Coverdale or Page fan.


"Take Me For A Little While"