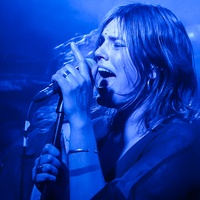 Coming fresh off the Friday night with Steven Wilson in Helsinki, it seemed like a totally reasonable idea to mosey on over to Lahti to catch a mostly local (i.e. Finnish) set of bands, headed by Goatess and Jess And The Ancient Ones. Stoner and psychedelic rock to balance out the massive doses of prog, so to speak. With Lahti being only an hour's ride away, the timing was just too good to let this chance pass by.

I made the assumption that four bands during the night should probably mean a decent-sized venue. Then I revised my assumption based on the name. Ravintola in Finnish means restaurant. Hence, I made a new educated assumption that we'd be in a kind of bar - which was closer to reality. So, we got to the right address, saw a sign, a door with the overhang, went in, up the stairs, I showed my ID to the confused guy selling tickets implying I was on the list while my friend paid for the ticket. There seemed to be a small stage with drums in place and a couple of guitars around, people were about, the music was playing. All seemed in perfect order. 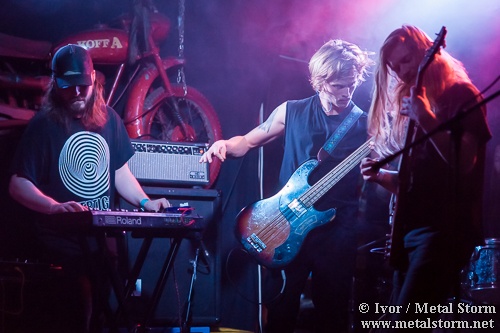 Except sitting there and waiting, the time for the first band to start came and went. Something smelled fishy. We could feel the floor resonate a bit, making me think about the place having some decent amplification despite contrary visual evidence. At some point, however, I felt it to be off sync with the music coming from the speakers. "What if we're at the wrong place?" we were joking. "You want to go check at the door?" Eventually I did. Turned out, there indeed was another place downstairs where you could get through a rather nondescript door immediately on the left outside. Another place that shares the bar staff, meaning that people behind the counter could serve at either place by using the staircase. Essentially we were at the right place, except that we weren't. Which sure as hell is a first one for me.

When we got to the right rooms, Baltimor had obviously been playing for a while. The stage was small, about 4-by-4 square metres at most, open at the corner. And it looked really crowded, which you could tell by the singer using the floor space to move about. There were practically no people about and I started to realise what kind of concert this was going to be: bands, other bands, and their friends. And some strays like us.

We obviously missed too much of Baltimor to make any decent judgement on their music. Tombstoned, on the other hand, was right on the spot. While technically not purely an instrumental band, they were performing without vocals that night as the guitarist said (well, mostly croaked) that he had no voice. However, stoner rock with a spacey undertone doesn't necessarily need any vocals, so it was quite good as it was. I can feel for the guitarist, though. On top of not having his voice, he also lost his guitar amplification towards the tail end of the set. 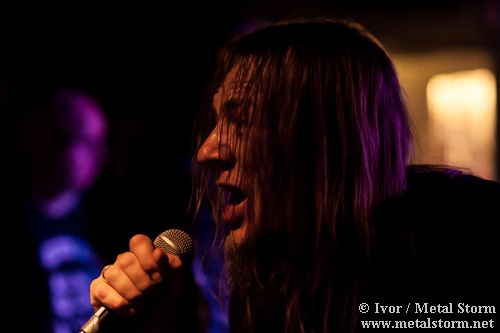 Swedish Goatess was the only foreign band on the bill. And it looked like these guys were there just to have fun and play, with not a care in the world as to how big their audience was. They were giving off a distinctly hippy vibe. I generally have the opinion that stoner rock can be either really good or really bad. When it's bad, it's quite atrocious. When it's good, it cooks your socks. Proper stoner needs good riffs, and rhythm you can groove along to. Goatess delivered on all of the above with plenty. It turned out to be a fascinating little discovery.

The small stage was a very, very tight fit for a six-piece Jess And The Ancient Ones. It looked and felt like a party where everyone has crammed themselves into the kitchen. They barely had space to move. Each one of them basically took a spot and stuck to it, with little movement in any direction. The crowd, which by that point could have numbered slightly above 60 or so, pulled closer to the stage to rock out with the band. It was a gig where the band and the audience were basically separated by an imaginary line that defined the stage. 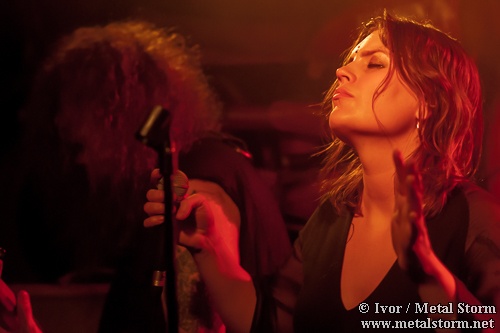 Jess And The Ancient Ones

I've wanted to see Jess And The Ancient Ones ever since I got hooked on their début album that's been catering to my inner hippie needs so well. Initially the new album didn't seem as perfect a fit, but it also got into my head and under my skin in no time. While I love the drive the band has as well as the melodies, the main ingredient that does it for me is Jess on vocals. I've always been a sucker for good female vocals, and Jess has got the range and the variety, as well as the power, to keep it interesting. On stage Jess is as expressive as her voice, appearing somewhat mysterious and coming off fittingly as a witch on ritual, especially if you take songs like "Astral Sabbath" into account.

When going after a band that you adore on records, there's always a chance of disappointment, whether due to them not being able to pull it off, or due to circumstantial reasons sometimes out of their control. Amazingly, while the venue was so small and, for me, hell knows where, the sound for the night was nice. I could mostly hear everything well. The band, while all engrossed in their own instruments due to cramped space, were doing very well at it. And Jess was simply spectacular. It's excessive to add anything else to it. 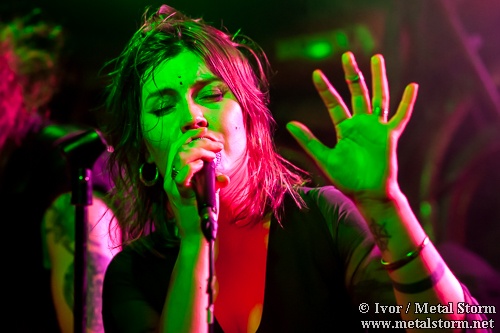 Jess And The Ancient Ones

Jess And The Ancient Ones were all I wanted them to be. I loved it through and through. The small quarters only seemed to amplify the experience. I slightly miss some of the songs off the début album, and totally would have loved to hear "Goodbye To Virgin Grounds Forever," but there definitely has to be another time. This one gig is not enough of this band for me. I need more!


Useful links:
Baltimor
Tombstoned
Goatess
Jess And The Ancient Ones