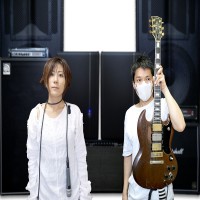 Picture The Damned. Now replace Dave Vanian's noble baritone with mousy tittering more akin to Kirby's chipmunk vocalizations, Captain Sensible with a masked stack of effects pedals and hemorrhagic feedback, Rat Scabies with a machine, and Algy Ward with a Japanese woman who otherwise suitably resembles Algy Ward. This is Melt-Banana, a cheery and unorthodox punk band whose unflagging enthusiasm has transformed the group into an endless well of indiscriminate and indecipherable intrigue. From a near-average noise punk quartet to an experimental grindcore trio to a something something duo, Melt-Banana has grown as it has shrunk and progressed as it has approached normality. The spastic blur of swirling motion and noise that is Melt-Banana has managed to turn some heads in its 20+ years of existence, if more out of confusion and curiosity than anything else.

Melt-Banana makes loud, raw, ear-splitting music, but there is no malice or visceral, metal feeling behind it; the band is more rambunctious than wrathful. The lyrical content underscores Melt-Banana's generally friendly nature: the lyrics to any given song are merely tongue-twisters and whimsical nonsense. If something has been lost in translation, then it has been very well-disguised over all these years and incarnations; the band's career sounds and feels like flights of fancy and derailed trains of thought rather than actual gibberish. In fact, considering the delightfully ridiculous lyrics, the preponderance of animal references, and the uniquely endearing quality of Yako's voice, Melt-Banana is, quite simply, cute. On a reasonably opposite plane, the band has also demonstrated an impressive capacity for musical progression, and the last album suggests that further experimentation may be on the horizon. Melt-Banana has never outgrown its characteristic appeal, however, and hopefully never will.