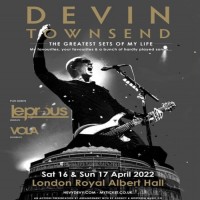 “Who cares if it's good, at least its live music”.

Those words from the man himself summed up the sentiment of this weekend of music. Close your eyes and immerse yourself in the music; it’s not 2022, you’re in a timeless void floating on each note, mesmerised by the lyrics... and fart jokes. Yes, this Easter weekend, Devin Townsend returned once again to London for two special shows at the Royal Albert Hall (RAH) that I was lucky enough to attend; to say I was excited would be an understatement.

It was ironic that these shows took place over the Easter weekend, because a Devin show is like a box of chocolates: you never know what you are going to get. Billed as “The Greatest Sets Of My Life, My Favourites, Your Favourites & A Bunch Of Hardly Played Songs”, both nights would feature different setlists with no repeat songs, meaning fans would be treated to four hours of a deep dive into the man’s back catalogue. Devin Townsend was setting a high bar for both himself and fans, but one that it was going to be fun seeing him attempt to leap over in his trademark wacky style.

Each night featured a different opening act, with Danish djentlemen Vola on the Saturday and Norwegian progsters Leprous on Sunday. Both opening acts had a 45-minute set with a 30-minute interim before Devin took to the stage. Owing to Covid concerns, Devin Townsend played with no production beyond lights, going the route of 'the smaller the crew, the less likely the tour could collapse should one cog fall out of place'. The shows featured the same backing band that had supported him during last year's Bloodstock Festival. 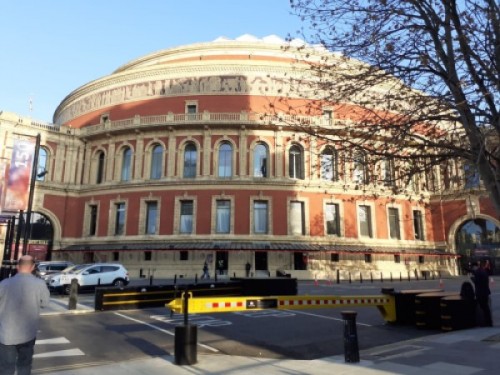 The Royal Albert Hall, enjoying its 150th anniversary this year

Kicking off proceedings were Vola, winners of the best djent album of 2021 with Witness. Perhaps the band had taken note of this fact, for much of the set was taken from said album, which made for a surprisingly good show. Opening with “24 Light-Years”, its haunting refrains reflected the grandiose surroundings and set the atmosphere perfectly. Running through each track with precision, the band received a warm reception from the packed house, threatening to upstage the headliner when the crowd roared in excitement as “Straight Lines” kicked in. Though the band stalled with an acoustic version of “Enter”, they quickly got back on track and up to speed with “These Black Claws”. A solid choice as an opening band and one that was well received by many in attendance, well worth catching if you get the chance.

Now, there was a half-hour gap before Devin Townsend was due to take to the stage; luckily, entertainment was provided by one audience member who had decided to ingest some form of hallucinogenic. Convinced he was the reincarnation of Ziltoid (R.I.P. apparently), he regaled those in earshot with fantastical stories of gibberish and tall tales of coffee connoisseur-ism. Alas, as Devin took to the stage, he decided he was needed elsewhere: whatever planet he ended up on, Godspeed sir.

And with that, the reason why everyone was in attendance emerged from the darkness, as everyone’s favourite mad scientist Devin Townsend finally took to the stage. Kicking off with “Failure”, he led the audience through an 18-song set that kept the audience singing along, hanging on to every note and smiling from ear to ear with glee and careless abandon. Even sans production, Devin managed to entertain the audience with sheer enthusiasm and charisma, being on fine form, putting his all into each song and feeding off the audience’s eager response.

With 26 albums under his belt in various guises, it must be difficult to represent such a diverse discography such as Devin’s, but he managed to keep the set varied and flowing. Tonight was evidently the ‘fan favourites’ part of the billing, with the set running through classics such as Strapping Young Lad’s “Love?” and “Detox” alongside the sprawling “Deep Peace” and the party-inducing “Vampira”. While Devin did take time to chat to the audience in his usual offbeat style (keeping the audience entertained in this way as a technical error was fixed before the encore could start), it was during one of these moments that Devin announced that he planned to produce and release a musical in three years’ time, so put that in your diaries for 2025, people (and Devin, if you can find him, I know someone who could play Ziltoid…).

The George Carlin routine was unexpected

Devin Towsend was in fine form, the enforced break having the apparent effect of rolling the years back on his voice, sounding rejuvenated and fresh to the benefit of those in attendance. Highlights had to be “Hyperdrive!” (a personal favourite all too often played acoustically which, thankfully, wasn’t the case tonight), a soaring rendition of “Regulator”, a rare outing of “More!” and the sheer spectacle of seeing the RAH lit up with phone lights during an acoustic rendition of “Ih-Ah!”. The whole spectacle was aided by his near flawless backing band and a sound that allowed you to hear everything and appreciate the intricacies of each song (with only “Juular” being victim to a poor sound). 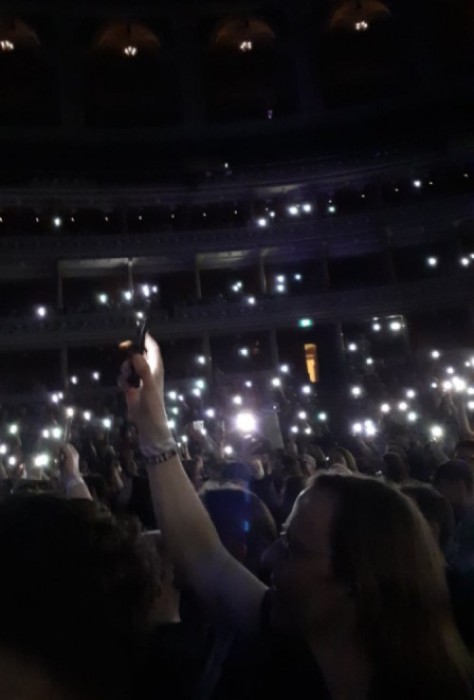 Time felt immaterial as I was so engrossed in the music that when Devin announced the encore, it felt like it was over all too soon, ending with the adrenaline-fuelled “Detox”. Night one drew to a close on a high note and nigh-on everyone went home happy to not only be witness to such a brilliant show, but with an actual large scale gig once more. Certainly living up to the billing of “The Greatest Sets Of My Life”, the first night ranks up there as one of the best Devin Townsend shows I have been fortunate enough to attend.

And so, here we were again, back at the RAH for night two of Devin’s “The Greatest Sets Of My Life”, with tonight focusing on the ‘my favourites… and a bunch of hardly played songs’ part of the billing. Having beaten Jesus’ respawn time, Devin returned once again and treated those who decided chocolate eggs were not their forte to a set that delved deep into his rich back catalogue, and played rarities and deep cuts so deep that they hit bone.

Having the honour of opening tonight’s show were Norwegian progsters Leprous, who, curiously, I had seen before supporting The Devin Townsend Project a few years ago. Now maybe it was the after-effects of Covid (possibly even the microchip in the vaccine) or my evolving tastes since I saw them last, but I was excited to get to see the band once again now I was a bigger fan of prog.

I was not disappointed by the band, who took full advantage of the crystal clear sound to let the songs breathe and allow those in attendance to appreciate the dynamics and expansiveness of their music. “Out Of Here” followed Vola’s cue of opening proceedings with a song nigh-on built for a venue seeped in such a rich history as the RAH. The band mixed rich audio tapestries with power on tracks like “The Price” and “Nightime Disguise”, which saw the audience firmly in the palm of the band’s hands. While I found them a chore to endure last time, tonight I was annoyed the show hadn’t begun earlier to give them a longer set.

Good news, now you can add Leprous to your list of metal bands who play with cellos on stage

Alas, there was to be no audience member to oblige us with drug-fuelled antics tonight, and so the interim between bands played out in a far more subdued mood.

It was then that Devin took to the stage once more, briefly welcoming the audience and wishing everyone a happy Easter before launching into “Seventh Wave”. Tonight’s set was far more music-based (not that last night was a flood of banter) with the band jumping between songs with barely a chance to take a breath (or a trip to the bar), which was welcomed by many as the first notes of the next unexpected track began to ring out.

Much of the set was culled from Ocean Machine and Infinity, the latter of which was particularly welcomed by me as it is a favourite of mine and one he largely overlooks bar one or two tracks. The live (in person) debut of “Dynamics” was one of the highlights of the set, begging the question why it has taken this long to be aired. “Om” and “Earth Day” were the two other highlights of the show, with the songs given new dimensions in the live environment, thought I must admit “Coast” ‘s mellow and serene charm fit the atmosphere the RAH provided.

He’s not the messiah, he’s a very strapping young lad

Apart from a false start during “Funeral”, the show once again sounded great, each component was perfectly balanced and Devin once again showed why he is one of the best musicians in metal today, hammering the vocal gymnastics of “Stormbending” and nailing the scream at the end of “The Death Of Music”; the fact he had managed to remember and play four hours’ worth of material is a feat that shouldn’t be understated.

Perhaps it was the sugar from the Easter eggs wearing off, but tonight’s show had a mixed reaction from the audience; with the diehard fans in attendance (such as me, hell, even my hairstyle is starting to resemble Devin’s…solely because I’m such a huge fan and not for any other reason I swear) enthusiastically enjoying the music and emanating a palpable excitement at the chance to hear such rarities, the newer/more casual fans in attendance were not as acquainted with the material tonight as they were yesterday, leaving a chunk of the audience nodding along to a track they had little to no knowledge of. It was when tracks like “Bastard” and “War” hit their stride that casual fans began to really get moving; the inclusion of “Truth” and “Bad Devil” was perhaps the peak of the show from an audience perspective, as everyone appeared to know these (rightful) classics.

Can you tell which one is the chosen one?

As “Grace” drew to a close, it was then that the night met its end, with the cool night air filtering through as the venue’s doors were swung open to the crowd, who were holding out in vain for one more song that did not come.

These shows were among the most memorable of the many different Devin Townsend shows I have attended over the years for different reasons; while night one was fan service and a welcome party mood, the second night featured songs I had not thought I was likely to hear live. Though both had their charms and qualities, the first night edged it for me as, post pandemic, it had more of the party atmosphere and sing along moments that I had missed a lot with the enforced absence of live music; however, it is a tough choice as getting to hear the rarities of night two was an experience to remember.

With Devin confirming he had finished work on Lightwork, I look forward to not only hearing the latest batch of wild and wacky songs that he knows how to do so well, but also for an excuse to see Devin live yet again.

Written on 23.04.2022 by
omne metallum
Just because I don't care doesn't mean I'm not listening.
More articles by omne metallum ››