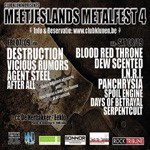 Unfortunately I wasn't able to take pictures as my digital camera fucking broke somewhere between the try out and the first concert a few hours later (argh).

Eeklo. A small, kind Belgian municipality somewhere in the northwest of Flanders with about 20.000 inhabitants. Eeklo is also the centre of the region called "Meetjesland", hence the name of the festival. The city is known for its? well, nothing actually since it's only a small, kind Belgian municipality with only 20.000 inhabitants. But for the metal (and especially thrash) loving part of Belgium, Eeklo seems to be the Mecca of superb thrash concerts with a top-notch line up these days. Also the Meetjesland Metalfest offered a very tight line up; covering on Friday the Belgian date of the Alienigma European Tour of Agent Steel together with label mates Vicious Rumors and Belgian Thrashers After All and with, on top of that, the German Thrashers of Destruction as absolute headlining bonus. No thrash fanatical can deny that this line up makes you lick your fingers, and I was actually looking forward to this night for a very long time already. So, after that certain grand night of pure fucking thrash some months before, and with high expectations, this young Metal Stormer from the city of Leuven once again returned to Eeklo to have another amazing night.
Let the thrashings begin!

Despite the numerous traffic jams, I was right in time to see After All perform from the beginning. I had already seen them live before on A Night Of Pure Fucking Thrash, so I knew what they were capable of and I certainly didn't want to miss them as they're really one of the best Belgian Thrash bands at the moment. To summarize, After All's sound is solid, fast and tight, so what more do you need as a Thrash fan? However, the previous time I saw them, they were loud and tight, but that wasn't really the case that Friday. Now, they were extremely loud and extremely tight, and it was really a pleasure to see them live again. After All got the absolute honour to tour along Vicious Rumors and Agent Steel as a solid support and opening act, and they really did everything they could to live up to their name as "Bruges' loudest" (but actually as I said, they're more and more becoming "Belgium's loudest" nowadays). As they only had 35minutes to play, the setlist obviously included only their best and heaviest songs, so the audience was already totally warmed up for the rest of the evening, which promised to be a heavy one for sure. I was also really glad Peter Evrard (2003 winner of the Belgian version of Pop Idol) wasn't filling in for vocalist Piet Focroul, as he did on some other dates of this tour, although I must admit I'm a bit curious how it would have sounded. Anyhow, After All's performance was a great start of the evening, and it seems they've made it a personal matter to deliver a kick ass show on this "home match" of the tour.

Vicious Rumors really got the mood going. The crowd became louder and VR slowly but certainly brought more and more atmosphere into the town centre. Sure the band suffered a severe loss after Carl Albert's tragic car accident many years ago, but still guitarist Geoff Thorpe's brainchild is still kicking serious ass and is still a pretty big name in the US metal scene, and after almost 30 years the band can still be considered as one of the best in its genre. And vocalist James Rivera (known from Helstar, so you already know what to expect) really does everything he can to keep the old Vicious Rumors spirit of Carl Albert alive. Also on stage the band still has a fresh appearance and there was really nothing bad to tell about their performance, as it was really a short but good show. They played a lot from their latest excellent album "Warball" but there was also room for some older classics. Too bad they could only play for 45 minutes, but every minute was totally worth it.

Sonic Rebellion
Mr. Miracle
On The Edge
Soldiers Of The Night
Minute To Kill
The Immortal
Six Stepsisters
Abandoned
Hellraiser
A Ghost Within

And then it was time for one of my dreams to come true: finally seeing Agent Steel live and at the same time being able to go berserk on the front row.

Like Vicious Rumors, also label mates Agent Steel are a legendary band in the US Metal scene. After a short span of 4 years, the band disbanded in 1988 but reunited ten years later and kept delivering awesome material from then on. But also Bruce Hall had the almost impossible task to take over the vocals duties of John Cyriis, but in my opinion, also he is still doing a terrific job. And he's a sympathetic and great performer on stage too, having enough interaction with the audience, letting people sing in the mic and clapping people's hands when they're waving at him. Though, the band is obviously not the same anymore as back in the days, and also live this change is very clear, certainly when older songs are played. Agent Steel's contemporary sound is more forceful, furious and vocals are rougher (the legendary high screams are no more), but that doesn't mean they lost their ability to deliver top-notch guitar riffs and solos and top-notch Speed Metal. The setlist was very varied, playing a lot of good songs and classics like "Guilty As Charged", "Bleed For The Godz", "Agents Of Steel", "Ten Fists Of Nations" (one of my personal favourites) and many more. And although they only played two songs of their latest "Alienigma", I could tell it's just another kick ass Agent Steel album with the classic fast tempo changes and catchy melodies.
It was really unbelievable to see how this amazing band could live up to their name. Indeed, these "Masters of Metal, Agents of Steel" were truly the metal masters of the evening with their appealing Speed Metal. To me Agent Steel were without any doubt, the highlight of the evening.

Next up - after a delay of fifty minutes - were the three impressive Germans of legendary Thrash band Destruction.
Teutonic Thrash is really a Thrash subgenre on its own. Even though I'm more into Bay Area Thrash Metal, though I'm a pretty big Kreator fan too, I was overwhelmed by Destruction's massive sound. Sure, also that night, there was a clear difference between the sound of the two previous US bands and the German one, but that didn't spoil the fun at all of course since Destruction is a great band live. Seriously, you can say the hell you want about Teutonic Thrash, but these guys sure now how to play their Thrash! Their show was really awesome. Awesome, loud and heavy. One could ask himself how it can be possible that only three men can be responsible for such a loud and heavy show, but I can assure you, that hour and a half was a real Thrash fest. How do I know? Well if people, after a whole night of thrashing and headbanging and after already 70 minutes of total fucking Destruction, are still dancing and cheering on the famous Psycho theme song, you can be sure you're at a Thrash party!
The setlist was quite varied and included a lot of killer songs, and on our demand they even played "Tormentor". Maybe they sounded a bit repetitive from time to time though, but, as there's nothing wrong with playing good repetitive Thrash, I'm sure no one really cared. Especially the guys in front. I really had a lot of fun with the numerous die-hard fans in the moshpit who were screaming along as loud as possible.
My recommendation: if you get the chance to see Destruction next year on their 25th anniversary tour, just DO IT!

Special thanks goes out to Willem and the rest of the Club Klunen organization for making this concert review possible.