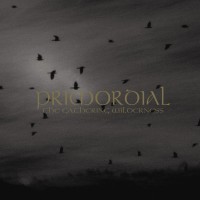 This was the last song written for the album and we really were not sure how it was going to turn out on the album. As for it ending up as the opener we never expected that at all. But somehow it just chose itself as the opener. It has this very repetitive riff at the beginning that has a kind of hypnotic quality which I like a lot.

At least to me this is really typical Primordial, it has all the trademarks. The sweeping guitar, melancholy and that dark claustrophobic feeling. The lyrics are really some of the darkest I think I have ever written for the band, they started out at some dark moment wondering about all the things I have written over the years and how it had changed me, and changed other people. Then I sort of went somewhere else with it…First song we also ever used violin on which was interesting.

This is the Bathory song really and truly. Even the scream at the start is placed there as a little homage to Q. Another simple song that could even have been on our first album as well I think. Continues lyrically along from where sons of the morrigan left off on the last album.

This is pretty personal, originally started off as something more personal lyrically and I began to expand it beyond the few people I was dealing with to something more universal and this feeling that your culture is being sold and there isnt a thing you can do about it. I wracked my brains for weeks trying to think of a title for it actually and it was decided upon about 5 minutes before we had to name the songs for the master….

I guess this is the emotional high point of the album really. I've been trying to write a song about the Irish famine for years and finally it clicked into place. I didn't want it to read like a history lesson and then I saw this inscription on a headstone on mass grave that became the middle verse and it all fell into place. This song is going to mean a lot to Irish people and live I think will be awesome.

Initially my least favourite song on the album or the song I was least connected with but it has a flavour again of the first album I think. It sits rather strangely between the songs before and after as they are very melancholic and tragic sounding and this is almost slightly fantastical sounding to me.

This track is almost like an afterthought to the album. Some things were done wrong in the mixing and recording that in the end we grew to like and simply left there. Brings the album down nicely I think, almost like a heavy comedown emotionally. For me again quite personal, I was walking around Rome one day during the recording of the Void of Silence album and realised no one knew where I was and the thought of leaving my life completely entered my head, just simply walking out on it all. Often when I am travelling I think about home and all the people I love there and that kind of thing. Its always the same…this song kind of deals with those feelings.