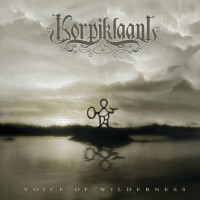 First I made the violin melody which came when I just practise playing the guitar. The riffes came around it and the whole song came very easily.
At the first the song sterted from the chorus but we changed that thing at the studio.
The song feeling and atmosphere was pretty agressive and danger so In the lyrics, I used inspired, feelings and some lines from Finnish war movie Tuntematon sotilas.
"We eat iron and shit the chain" and "attack forward you nordic boy" is directly translated from the lines of the movie.
Somehow the chorus is little bit like after war feelings.
I mean something like "we gonna rise again"

Melodies and riffes came again just playing the guitar at home.
The song was ready about twenty minutes and the lyrics came when I listened my demo version of the song trying to find out what the song wants to tell me. This fast, fun sounding song told me about happines of freedom so what could be better object than Journey man.
"Free, free as a journey man, feel heat in the moonlight"

Inspired of Fields in flames song was Klaus Kurki who was some kind of judge some part of Finland but made work to King of Sweden.
Finland was the part of Sweden to year 1809. Klaus collected the taxes with two hundred horsemen around Finland pretty cruel way as you can hear from the song.
His lands and estate was in the Vesilahti.
Vesilahti is the place that I growed up.
Pics and some facts of my home village you can find from this web address:
http://www.narva.sci.fi/amaijala/

This instrumental song we made in the band practising room.
Our guitarist Honka had the verse melody and riffes and I made the second part of the song and melodies for the others.
The feeling was huge on the practising room when we realize how good song we made.
I think this is one of the highlight of the album.

This is pretty old song and the name of the song it's easy to guess that this song would be meant to the Spirit of the forest album initially.
I wasn't very satisfied to the arragement the so I let it our from that album.
Somehow this song didn't leve me in peace so I had to dig it out again.
Now it works.
Maybe this song was just meant to the this album.

This is praise and thanks song to our fatherland.

Again one of the songs which just comes quick and easy.
I had good and happy feeling and it caught to the song.

I made this when I took underwear drunk at home.
The name of the song means translated in english "Drinking party" but the truth is that I had my own party with myself when I made the song.

This is old song.
We recorded this already to the Shaman "Shamaniac" album but this was sung by sámi language then.
I needed to make this again with Hittavainen and all of his folk instruments.
Hittavainen always blame me because bagpipe is not as loud as it should be on the album but it is his own fault because he wasn't at the studio when we mixed this.
Seems like we have to do this third time again with the next album

Old tale song name could be "same old tale again" as well.
You can find the same tale something like 2500 books and movies.
"Rich girl falls in love with poor boy and got pregnent to him without married" Nothing was worse than that in the old days.
The song Old tale is just my variation of the story.

came after I red some real storys about finnish evacuation people after the war.
There was many kilometres long black queue mourning and crying people. Mainly just became widows and children with their stuff and cows.
The countries line changed after the war so they have to move away from the old Finland.
I had a demo recording one of Hittavainen's song which was bleak and oppressive and I just wrote the text listening the song.
Whole text came very easy because of my "right kind of" bleak mood.