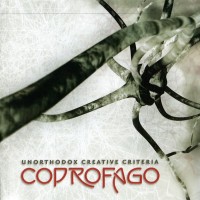 
01. Crippled Tracker
This is one is based on a short riff that is repeated again and again in order to make an industrial-like effect. It is a pain in the ass to play I must admit.


02. The Inborn Mechanics
Three minutes-long and an ABACBD structure that make it almost pop. With some rap and DJ scratches over it, maybe we would have been able to compete with some of those nü-metal tunes.


03. Neutralized
This is a rather old song. At the beginning it consisted of the verse and chorus riffs only. When Sebastian listened the ending of the guitar solo convinced me to repeat that riff at the beginning of the song… since then this is one of my favourite songs.


04. Merge Into
When my guitar synthesizer arrived, I spent several nights doing nothing but playing on the "new toy". Some nights I left the tape rolling… in one of those tapes "merge into" was found.


05. Fractures
A rather simple song, based on a single riff of mine. Sebastian came to save the day when he added the vocal line. Emotive.


06. Hostile Silent Raptures
This is a rather old song too. For those polimetric freaks reading this interview, it might be of interest that the verse after the drum solo is a 15/16. And man, sounds catchy anyway!


07. Streams
Although this song had a vocal line written, for an unknown reason we never felt like singing it. The mixing date arrived and yet nobody wanted to sing it. So, consider it a Karaoke tune for you to sing along.


08. Isolated Though Multiplicity
This song is strange. The drum pattern is strange, the structure is strange, and the chords are strange. Can you hear "Jacob's Ladder" at the end?


09. Individual Choice
The name comes from one of my favourite albums of Jean-Luc Ponty of his 80'Sn period in which he experimented with sequencers and loops. The timbre of the keyboards used on this track reminds me a lot of that album, hence my little tribute to one of my biggest influences.


10. Glimpses
At the beginning this was a string arrangement for Fractures. If you listen carefully you will notice that the chords are the same. However, during the writing we noticed that it would be better to leave Fractures alone, and give this piece a more obscure feeling.


11. Motion
Most likely this track is the oldest of the album. It was really fun to record it. I think there are a couple of hundred different solo takes for this one; it was really hard to decide which one to include on the final release. Listen carefully to the bass line throughout the song; every time I listen to it, I feel like calling Felipe to congratulate him.


12. Constriction
I would gladly play in a band in which all songs where like "Constriction", brutal and groovy.


13. Wavelength
I love this song. It's a good compilation of all the tricks used on the album. An excellent track to finish it.