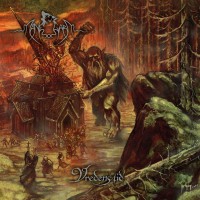 
This is Pierre answearing, author of all the lyrics.
I will only give you a breef overlook of the lyric, some small directions...the main thing for me as an writer is that the reader creates his own thoughts and interpretations...


01.Vid Hargen "At The Ceremonial Stones"

It´s an intro to Sigrblot, you can hear people approche the ceremonial place where they´ll hold a blot to Oden for victory, in the forthcoming battle.

This song represents the blot to Oden.

This is a shaman travel between both the nether- and upperworlds, in search for wisdom.

The album cover is based on this song.
It´s the story of an old troll who´s trying to sleep, but keeps getting disturbed by the church-bell in a village near...he really don´t like those christians and gets quite angry.
I wrote it like an old folk-tale...

This one has very personal lyrics, but I can say it's about dying and the moments afterwards...

It´s both a single track and a intro to the title track. The battle represents the beginnig of the time of wrath, the first battle in a new era.
The purification of both soul and mankind, not to forget to mention is that the main thing that surrounds the lyrics is, in my opinion, the importance for us to re-establish our ancient ways and customs, also known as "asatro", I prefere to call it "forn sed".

This is where all the old and hidden wrath is gathered and released, the purification has begun...

This is where the listeners thoughts and feelings are the main important thing, a moment to reflect the past maby...

Ok, this one is very important that the listener reads, cause its the epiloge to our next album, which is going to be a concept-album...i don´t wont to tell you more this far. Read the lyrics and you might know...

It's about a man who has been away from his land for a long time, and he both hears and feels his homeground calling him back...

The end of this album, and the end of the time of wrath, battles and the purification… a time when we lean back and remember the fallen, our great forefathers, a time to raise our horns to Oden and thank him for the victory he gave us at last...a time for drinking and joy. A time when "seden" is strong...