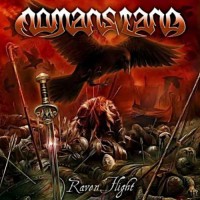 
Hjervard: We tried to put the songs in a certain order, so the listener could join us in a Viking campaign and feel himself a part of the story. Sailing away from motherland's coasts and coming back home in glory.

The very start of the campaign, getting ready, preparing the rigging, the ship, the arms, everything that will be helping the warriors to survive against the enemies and storms…

The second composition is about the first skirmish with the enemy and the fight… The northern warriors are gaining the upper hand of the enemy again, getting their share of slaves and loot. We praise you Odin!!!

According to the tradition the Vikings can't do without a scald who will make a good song about their feats of arms. Magic of his songs will help them to defeat the enemies in heated battles and will carry the glory of their victories through centuries, for brave warriors never gave up in the face of hardships, they kept going on, even loosing brothers in arms, who stood shoulder to shoulder in front of the enemy. It happened so that in our crew we also have a scald named Torir who made a saga of first heroic deed.

When you are in the midst of heated battle knowing that any moment now you can be struck down by the enemy's sword, the time comes to consider if you will be received in Valhalla, if you deserve to sit next to Odin at his table…or you will have to face Hel, surrounded by poisonous snakes.

Flashes of lightning in the black sky and storming wind, northern people know - it can be only him. The one, who spreads fear over Yotunheim and who is worshipped not less than Odin himself. Defender of Vikings and destroyer of giants Tor. He is the one who helps people, inspire them and encourage them to go in for heroic deeds.
That is to his honor all of them wear his hammer talisman Mjolnir!

This song is the actual hymn of the album. Part of motherland which is in every Vikings heart during their long and dangerous companies. We wanted it to be among the best Vikings hymns! While working at it we all were overwhelmed with the emotions. You know when you have goose skin all over the body and you can't help it. We believe the strength of our emotions put into the song will reflect in all pagans' souls.

This is the main composition of the album. The main battle of the campaign and some of them will rest in peace here in this field forever. With every flap of ravens' wing the warrior is getting closer to the victory, flap of the wings and sweep of the skulls - the sea dragon is flying to the battlefield. Here is the ship fully loaded with loot and trophies and it is time to be coming back home. Now only winds and storms will be blocking the way.

Dragon's jaws and its grin help to avoid many misfortunes while in the sea. Let Njord not thinks it is easy for him to overpower the good warriors. The Vikings swords are as sharp as dragons' fangs.

The powerful Njord doesn't want to lose his chance and get his share of loot trying to make the sea open its jaws and swallow up the brave Normans.

Screaming, clanging and grinding of the arms, creaking voice raven over the battle field and earth, drenched with warriors blood. Even back from their campaign the Vikings will remember long their feats of arms, anticipating new battles and glory.

The dangerous and hard campaign is over and they can almost see the native coasts and the faces of their brides, all there to meet the warriors. We are back home again. We praise you Odin!!! SKÅL!!!

Posted on 06.01.2007 by
Susan
Susan appreciates quality metal regardless of sub-genre. Metal Storm Staff since 2006.