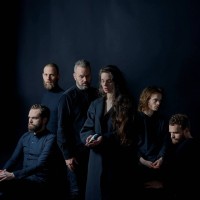 GOLD's mysterious and highly charismatic set at Roadburn (covered here) intrigued me so much that it led to my review of their latest album, Why Aren't You Laughing? Opportunity came knocking at my door and I found myself with the possibility of interviewing GOLD right as they were entering a large European tour. Milena and Thomas were kind enough to answer my questions.


I personally discovered GOLD at Roadburn 2019 and recently found out about your previous performance back in 2013. Shame I missed it! How are your concert and tour experiences now compared to before?

Milena: A lot has changed. When we played Roadburn in 2013 we had just started. We were figuring out what GOLD was and what we liked. This year's Roadburn show was very amazing. We've been working so hard, giving our all for our albums and our tours. It felt like a reward for all that hard work. The venue was packed and there were so many people outside standing in line to get in, very overwhelming.

You will very soon start a large European tour! How are the preparations going for your journey? What can we expect?

Milena: The preparations went well. We toured in the beginning of this year and had a little bit of time off after. It gave us time to reflect. We changed the set, added some older songs and wrote a live version for one of the new songs. We will play songs from our last 3 albums and although our style is pretty eclectic, I think the show is scenic and solid and therefore gives you this extra dimension to what our music is on record. 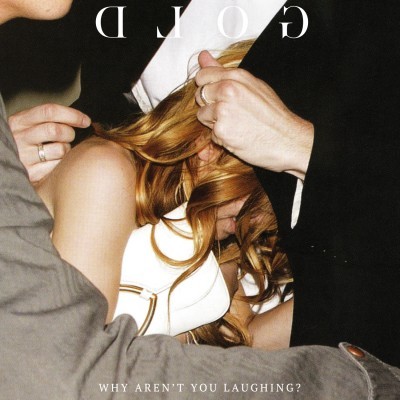 The ambiguous artwork of GOLD fourth and latest album
Your fourth album, Why Aren't You Laughing? has been met with very high praises. Do you see this album as a turning point?

Thomas: It's not our first album to be very well received by the critics, but it does seem that for many new people Why Aren't You Laughing? is their introduction to GOLD. We're super happy with all the great reactions we've received to this album. It's a super personal album, into which we've poured our hearts and souls.

My curiosity is killing me! I have a hard time figuring out what is going on with the artwork of your latest opus. At times I think it is a celebrity trying to hide from paparazzi. Other times I think the woman has fallen ill and is being attended.

Milena: The artwork for this album has raised many eyebrows. What I see when I look at it is a woman, seemingly having everything she's ever wanted, she's hiding, maybe even running from what others want from her. What we like about it most is that it's very vulnerable. I think it's great that you're not entirely sure what you're seeing. Especially when listening to this album, your opinion on the image might change.

Your latest videos have a deeply moving aura to them; from the heartbreaking "He Is Not" to the thought-provoking title track. Music videos are not as prominent as they once were. How important is to you to be able to translate your music into visuals?

Milena: I wish we could do a video for every song! I really like adding that extra layer. When you listen to a song for the first time the sound will give you an idea on what it's about. If it's happy or sad or angry. After that when you burry yourself in the words and try to understand what it's about it can give you this extra perspective. And then there's the live experience, the cover artwork or a video that can give you this new direction. A song can have many more experiences than just the original thought behind it.

It is quite a trip to go all the way back to your debut, Interbellum. To me it almost feels upbeat by comparison. How has the pass of time affected the band both in musical and lyrical terms?

Milena: Interbellum is very far from what we do now, but it was already far from what we did on our second album No Image. With the first album we were just trying to find our sound and if you ask me we did some things I wouldn't do again. It took me some time to feel free and be vulnerable. No Image is very important to us. It was the album where we decided to do whatever we wanted to and at the same time be as honest as possible. With every album after that we delved deeper into that. We try to keep away from clichés and repetition.

There is an incredibly homogenous mix of many, many different styles in GOLD's music. How do all of you complement each other for the songwriting?

Milena: Thomas and I always write the base of the song. We start with a guitar riff or a vocal melody and go from there. Every song we ever wrote started on acoustic guitar and vocals in our living room. I think that is one of the reasons we are genre-free. We never write starting with a sound but starting with a song. When we have, what we believe is a good start, we go into our rehearsal space and play it to the others. Everybody adds their flavor to it.

I'm always curious about the artistic background of a band outside of the obvious musical one. Does any of you work with other art expressions? Has said expressions played any role in GOLD's development?

Thomas: There's a lot of different artistry happening between the band members. Jaka is a tattoo artist, Milena has studied furniture design, and I used to be a full time graphic designer. Milena and I take care of all the art direction in the band, and every now and then we also do some art for others. Kamiel works in cinema. Leyla and Milena both work in fashion. And Igor is a studio engineer, producing lots of music for other artists.

On behalf of Metalstorm, its' staff and users, I thank you for the opportunity to dive deeper in the inner workings of GOLD. I leave the last words to you!

Milena: Thank you for having us. We hope to see you all on one of our upcoming tour dates!

GOLD are currently on a tour! Do not miss out!