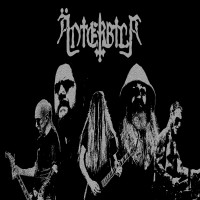 I had the pleasure to talk with Jerff from Änterbila about their inspirations, their future, and - you know - stuff like that. Particularly interesting was the talk about their lyrics, I think. About how Scandinavia is such a great place to live in now, but it wasn't always so. And this is what Änterbila sings about. How we got here, how we came to be a place like this. Abuse, starvation, shit like this. Well, see for yourselves, I guess!