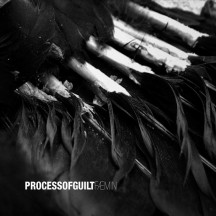 
When Marcel reviewed Process Of Guilt's monstrous Erosion in 2009, he noted:

"…the band have now moved on towards to a more, what some would probably call, post-doom sound."

Suffice it to say that observation is even more true with 2012's Faemin, where the band further move in that direction. Rest assured, dear reader, this is not the ethereal wussy style post, but the Cult Of Neurosis bludgeoning by riff type. They also incorporate an organic version of Godflesh's mechanized assault. The end result of co-opting these elements with Process Of Guilt's own style is five tracks of visceral riff fest laid over a foundation of tribal drumming.

Admittedly it took some time to process and accept, particularly given how amazing Erosion was and the expectation of a continuation of that style. The opening track, "Empire," begins with a trudging riff that while introducing the approach… usually albums seem to open with their strongest track, and "Empire" is my least favorite of these five. It sort of ambles along for a couple minutes in a Neurosis-like build-up that has you waiting for it to finally explode.

The remaining four tracks feel much stronger. Crushing riffs, pounding drums given a bit more of a raw sound in the production envelope and overwhelm the listener. "Cleanse" has momentary mellow bits for a few seconds of respite before resuming the assault. The chorus of "Harvest", 'Blood! Harvest!" harkens back to the bellowed chorus of Godflesh's "Locust Furnace."

All in all it is a gripping, unrelenting listen. Once Faemin gets its momentum going it is a crushing wall of sound.

Initially it might be a bit of a surprise as it feels like a continuation of what they've been doing, only accelerated as at first listen it seems maybe two or three albums removed from Erosion rather than a follow-up. Process Of Guilt has shown over albums and EPs a willingness to evolve, making each iteration work and uniquely their own. This holds true for Faemin as well - I've referenced a lot of influences they've allowed in to the sound, but they still make it their own.