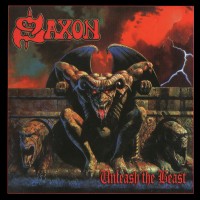 
I've been spinning this album quite a bit lately, after owning it for a long time and never giving it the attention it deserves. The album is a little mix of heavy metal and material more at the border of hard rock and heavy metal. Saxon started to build a more aggressive, harder sound in the '90's after their more commercial sounding late '80's albums and with Dogs Of War this was most evident. Again they took another step in the harder direction with Unleash The Beast, and I think they hit it right on with this album.

Doug Scarrat made his debut with the band on this album, replacing original member Graham Oliver on guitar, and although it is always sad when an original member goes, Doug fit in perfectly and injected a freshness to the Saxon sound. This album presents a band in top shape, with very competent playing and a very professional and entertaining songwriting, losing the corny subject matter representation of the last few albums. The major highlights of this album are the excellent guitar melodies, extremely well done and catchy as hell. Biff Byford has never sounded better. Thumbs up for the producer Kalle Trapp, who did an amazing job here, as every instrument is easy audible and gets the opportunity to shine. It's hard to choose the best song on this album but my highest praise goes to ''Terminal Velocity'', ''Absent Friends'' and ''All Hell Breaks Loose''. You know, there aren't many bands left in the world that play to this calibre. The album has a great dark gothic picture on the cover, and mirrors it perfectly.

Unleash The Beast kept traditional metal alive. It was a wake-up call for old bands and an encouraging light for new bands to join together and pull heavy metal out of the darkness into which it fell in the early and mid '90s. So, in the end, should you get this album? That's a silly question, isn't it... Go to the CD shop, you will not be disappointed.