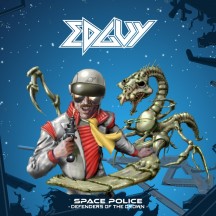 
Oh right. You're kidding me. A macho man with a welder/gun in one hand and a Pokémon born bad and grown worse in the other is staring at me with a not-so-heterosexual fleer. Am I supposed to take it seriously?

Of course not, it's Edguy we're talking about.

Defenders Of The Crown marks Edguy's return, and it was preceded by cautious and safe statements from the band's side: "It's so True Metal, that even True Metal people won't stand it [...] If awesomeness could be measured & we had a scale from 0-100, this would be... Well, too awesome to be measured." This said by Tobias Sammet, the man who described the band's latest albums (which were everything but the best metal albums ever) in the same way. Many agreed about the fact that those words were to be taken with a grain of salt. Actually, with a silo of salt.

Defenders Of The Crown is not the best album ever. Neither is Edguy's best release, but this brings the German heavyweights' music to a level which has been a mirage for a decade. How could this happen?

The main reason is that the band finally decided to listen to the fans' prayers and to take a step back, to disown that kind of weak power hard rock of which their recent works were tainted, embracing again the sound Edguy mastered through the years. Defenders Of The Crown embodies once again the typical German power metal style: heavy, fast and cheesy, incredibly catchy, and with a stellar performance by Sammet - and his bandmates too. The 11th Edguy album proves these guys are still hot and burning.

Quite ironically, while Avantasia was born from a rib of Edguy, now the first is bringing the latter back to life, since Defenders Of The Crown has many Avantasia traits. From the opener "Sabre & Torch", that many correctly matched with "Invoke The Machine" from 2013's The Mystery Of Time, to the 9-minute closer "The Eternal Wayfarer", which just sounds like Edguy covering Led Zeppelin, everything is over the top and epic. It's been way too many years since we couldn't associate "epic" with the band.

But, obviously, this is Edguy. The fun traits of the band also shine here, both with Tobi's well-known antics spread over various tracks ("Do Me Like A Caveman"? You'd better be kidding me) and in the rather unexpected cover of Falco's "Rock Me Amadeus" (feel free to suffer right here). Some of you will cry while blessing your ears with it.

Defenders Of The Crown is a great release, the first in a long time that doesn't cast aspersions on Mandrake and Hellfire Club's memory. With restored songwriting and musicianship, Edguy are back on track. Back to Baba Yaga, beotch!

Written on 10.04.2014 by
R Lewis
Hopefully you won't agree with me, diversity of opinions is what makes metal so beautiful and varied.