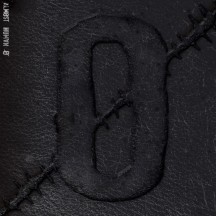 'Twas a fine autumn morning when, while going through my (physical) mail, I found Almøst Human's Ø. After surviving the rather creepy how-the-hell-did-they-get-my-address moment, I was forced to admire their commitment to promotion, and realized that the least I could do was to give the EP a spin.

Turns out Ø wasn't at all an empty set - pun intended - concerning good music. Personally, I've never really been into Gothenburg-kinda stuff, but bands like In Flames had the merit of being among the very few that kept the genre at least interesting. Til Siren Charms, but this is nor the place nor the time to talk about this. This was simply said to explain why, when "Living Wreck" started playing and I was instantly redirected to songs a la "Deliver Us", from Sounds Of A Playground Fading, Almøst Human had me definitely interested.

Make it be the well-balanced contrast between the cold electronic sounds, the rawer guitars and the oppressive bass-generated background, or the surely not new but still effective mix between clean and harsh vocals, or the authenticity of the emotional punches the release throws, or again the relatively catchy choruses, but something kept me coming back for Ø a lot, even out of reviewing purposes.

A positive contradiction is that the EP, though not containing that much style variety, still maintains a pretty good replay value. One could say that its lack of variety doesn't get noticed much due to its limited playing time of around 25 minutes, and that'd be true, but on the other hand it's impressive how an album of just four tracks doesn't become utterly boring after a few spins. Under a layer of straightforwardness, in Ø there's more than meets the eye ear. Moreover, though remembering the above-mentioned In Flames, together with other acts like Devin Townsend, Almøst Human's mark is already easily noticeable.

The EP is available to listen on ReverbNation and SoundCloud. So, for anybody who's looking for an adrenalinic crossover between heavy, trash and death, or for whoever is in for something young, modern and really promising, Ø might be full of surprises.

And this joke is getting old.

Written on 23.11.2014 by
R Lewis
Hopefully you won't agree with me, diversity of opinions is what makes metal so beautiful and varied.