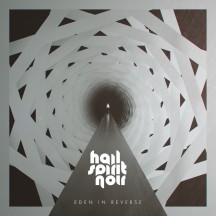 
If I had to choose one single band that in my opinion left a mark on metal in the '10s, it would be Hail Spirit Noir. I am so glad that it looks like they will be leaving an equally significant mark during the '20s as well.

Hail Spirit Noir's progressive, blackened, experimental, and psychedelic take on metal music has been a breath of originality and fresh air. To describe Eden In Reverse, I will have to remove 'blackened' from the equation, since there are very few instances where glimpses of black metal can be traced, like in the blastbeats of "The First Ape On New Earth" or in the harsh vocals of the excellent bonus track, "Ever-Shifting Tunnels". This album feels as if Hail Spirit Noir borrowed David Bowie's space journeys, Kraftwerk's synths and Camel's progressive melodies, and decided to cover Pink Floyd songs. It looks excellent on paper, don't you think? Let's see how it actually sounds.

The band is now a sextet, since the core trio have added their three live musicians as permanent members. They now have two vocalists and two synths players and this is very obvious when listening to the record, since it is dominated by gorgeous (clean) vocal and synth harmonies. While Hail Spirit Noir's previous albums could work as the soundtrack of '70s Italian horror films, Eden In Reverse sounds like the perfect score for Stranger Things or for a John Carpenter film. The familiarly psychedelic and trippy element of their music is very much present and passages similar to ones used before can be heard so it's not that the band is unrecognizable on this album, but they do dive deep into a retro-futuristic sea of late '70s and early '80s sounds in a way that they've never done before.

It took me a while to get into this. My initial reaction after the first listen was that Hail Spirit Noir ditched a very original approach in favour of something much more mainstream and accessible. I felt it was lacking fire and energy. The drum patterns felt somewhat similar, the synths too prevailing and overwhelming, and the carnivalesque and blackened psychedelia of the previous releases was almost nowhere to be found. The songs themselves felt too samey in the beginning. But I had to give it another try. And then another. And another. And in the end I reached the point where everything fell into place and I just couldn't get enough of it. I started realizing why the band said that this was the album that they had spent the most time on. The 'flaws' I mentioned are there on purpose and they make for a super-classy and progressive, intergalactic sonic trip.

Eden In Reverse needs to be listened as a whole. It features two intro tracks, one for side A of the vinyl ("Darwinian Beasts") and one for side B ("The Devil's Blind Spot"). The centrepiece of the album ("Crossroads") is the one that sounds less like Hail Spirit Noir and more like Borknagar, largely due to Lars Nedland's guest vocals. The record feels as though it keeps on powering up the engine and it literally takes off with "The First Ape On New Earth", one of the band's best songs ever. "Automata 1980" gives a whole new meaning to the word 'closer'; the spacey synths dissonance in the beginning can be ear-hurting and the introduction is really long, but what follows is very rewarding and poses as an endless loop depicting the end (of the record? of the cosmos?).

Eden In Reverse is not as dark, malevolent and avant-garde as the albums before it. Hell, at times it is barely even metal. It is calmer and more digestible but at the same time bigger and brighter (not better) than any previous Hail Spirit Noir release and it is an invitation to get lost into the ever-shifting maze of the band's sci-fi dream. Looking at all the white light bulbs flashing in the rhythm of the music very much feels like staring at the universe and realizing how close to the stars this album takes you.

I don't know what the future of Hail Spirit Noir will be. They may go all Ulver on us by ditching metal completely and follow the path of the bonus synthwave version of "Incense Swirls". Or they may incorporate their '80s synths approach but also embrace a newfound twisted blackness, as they do on "Ever-Shifting Tunnels". Or they may go full jazz. Whatever happens, they will again be the band to watch for the current decade. Well done, lads.