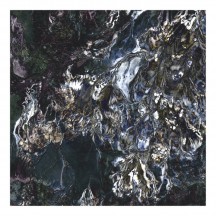 
Siste Lys is one of those releases that is highly enjoyable yet also ever so slightly disappointing.

To qualify that statement, I have to introduce readers unfamiliar with Ingrina to their debut record Etter Lys, which is for my money the most exciting debut post-metal record released in the past decade; only loosely conforming to the tenets of the sub-genre, their instrumental style, particularly in its multi-layered texturing and the approaches taken by the guitars (using a combination of sludge/gaze-y riffs, post-rock tremolo, hugely memorable lead guitar motifs and even occasional, tasteful hints of dissonance) and drums (from full-on tom-heavy pounding to more aggressive, up-tempo beats), absolutely floored me when I first heard it in 2018, and I've been hotly anticipating the group's second album ever since to see whether they deliver on the promise displayed on the record. Seriously, if you have a taste for post-metal and haven't listened to Etter Lys, you're doing yourself a disservice. However, I'm not reviewing that album, but instead Ingrina's sophomore release Siste Lys; how does this album shape up in comparison?

The first thing that needs to be said about Siste Lys is that the material featured here is only partially new; of six tracks, three ("Casual", "Stolidity" and "Frozen") are reimagined versions of the songs that comprised their very first self-titled EP released in 2016, although having not been able to find said EP on the streaming services I checked, I cannot compare the new versions to the originals. Rounded out with three new songs ("Jailers", "Walls" and "Now"), Siste Lys features the same number of songs as its predecessor but runs a quarter-hour shorter, partially due to three songs here ("Walls", "Casual", "Now") running shy of four minutes. Given how expansive a number of songs on Etter Lys were, the inclusion of so many brief tracks was a surprise to me. Of the trio, "Walls" is a predictably atmospheric semi-interlude of a track, quiet, spacious and ominous, whilst the shorter songs "Casual" and "Now" feel more like actual tracks, featuring several of the elements that Ingrina employed so effectively on their debut (particularly "Casual"). I enjoyed both, but they do feel slightly underdeveloped when one considers the directions in which the band were able to take ideas previously.

As such, the bulk of Siste Lys's material lies in the remaining three songs. The newest of the trio, "Jailers", opens up the album and is the longest entry here. From the off, many of the elements mentioned above (sludgy stomping riffs, tremolo, tom-heavy pounding, and hints of dissonance) are instantly on display; however, there's quite a lot of chopping and changing in the first few minutes of the song, which hinders it in gathering momentum. When it stabilizes, it delivers the sound I was so excited to hear more of from Ingrina, with the distant, echoing harsh vocals, sinister tremolo riffs and dense mix pulling the listener right in. I do feel like the flow of the beginning of the song is a bit disjointed, but for the latter two-thirds of its runtime, "Jailers" is a well-structured and compelling listen that displays why Ingrina are a band worthy of getting excited about.

The two reimagined longer songs, "Stolidity" and "Frozen", offer more quality post-metal to get sunk into, with more effective tremolo and powerful percussion, as well as some slightly eerier riffs, particularly on "Stolidity". "Stolidity" does feel a bit less intricately textured and arranged compared with some other songs from the group, which may be a result of it being initially written earlier in the band's career, but whilst it feels more traditionally post-metal, it's not to the song's detriment, and the group do work towards a satisfying conclusion, albeit one that feels like it ends a bit too soon. "Frozen" is a slow burner, in which the atmosphere is progressively layered and built up from sparse, bleak tones to a rich cacophony of sound.

I've tried to avoid coming across too negatively here, because by itself Siste Lys is a very well-written and potently atmospheric post-metal record, and I imagine anyone unfamiliar with Ingrina would be highly impressed by it. My main reservations come from some of the slightly less natural or fluid sections, such as the introduction to "Jailers" or the sudden premature endings to "Casual" and "Stolidity", all of which are relatively minor quibbles. The main issue I have purely comes from know what the group are capable of; if Siste Lys was the highly promising if imperfect debut that Ingrina had used as a platform to mature and announce themselves as the genuine article with Etter Lys, I would have been delighted with both albums. However, given how insanely well-paced and well-structured Etter Lys was for a debut record, I feel like Ingrina weren't quite unlocking their full potential when producing Siste Lys. Still, this was an album that was recorded during a difficult year for all of us, and a major portion of it involved updating old music rather than writing new material, so I can understand why it didn't quite live up to my expectations, and I'm grateful to have it to tide me over until the band can deliver their next album under hopefully more normal circumstances.

Written on 28.11.2020 by
musclassia
Hey chief let's talk why not
More reviews by musclassia ››