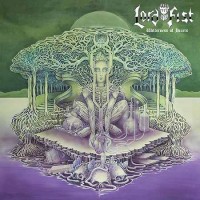 
I don't get it. Why is this album a 10/10 in my eyes and it's only rated 6 on the site? Why don't people seem interested at all? Why did the staff listen to it and declare it "not worthy of being nominated"?? I have to make my point then.

It has been said many times by absent-minded listeners that this music is nice, but not memorable, common, listen-once-and-done. The previous record had this problem indeed. You see, not only were the riffs not unheard of, with a repetitive feel, but also Lord Fist plays at constant high energy without release. In the end, you wonder if you have been listening to the same song for 30 minutes. One of the reasons the songs fail to grasp your attention at first is also because some lack a chorus, and only have verses. It's not a problem at all; in fact, I think it flows very well. The songs are already pumping so it's not needed to raise the momentum even higher. But this release is different. Although it still creates this impression, it is far more accomplished than the previous one.

The production is very nice and feels old-school without being bad. Usually, that's done by not cleaning the stems, applying lots of cheesy effects, letting noise ease in, or having a questionable balance. Here, we just have a plain, nice setting, and you can almost picture all the musicians in a single room. I mean to say that it's lively and up front rather than artificial. The same can be said about the whole music, I would coin it as 'coming straight from the heart' (even if it sounds 'clumsy' to some people).

The singer also has his own flavor. He doesn't come out as really powerful, and he's somewhat unstable when holding notes. I still think he's in the spirit, and feels very genuine or unpretentious, like he's actually singing the song. Besides exploring the counter-tenor register, he also totally flips to head voice on certain notes. Believe it or not, it's actually rare for this type of metal, and it's the first time I hear such things as far as I recall. The lyrics are fantastical and mysterious, although I can't make much sense out of it. "Traditional heavy metal", then.

The dual guitar work should be highlighted too. The arrangement is always efficient, and often asymmetrical, with different parts played left and right. Not in the Iron Maiden way, but with a more pondered choice of notes. Listen carefully, and there's always some fun licks playing at any given time. The chord progressions are rather original and didn't strike me as being cliche. I can't picture a single clear color, so I don't know what mode they use, but they still manage to give it a lot of taste by cleverly using the scales. There's a lot of playing with tremolo and licks. Each song features great and inventive riffs; listen to "Wings Drawn In Our Mind" with that groovy mix of 4/4 and 6/8 and tell me that's not memorable. That prechorus on "Aurorae" also kills me.

The drums are simply accompanying the rest of the music, with constant upbeat kick and snare, bringing some fills where it's needed; hence, the groove is very simple, but also really powerful. The cymbals are pleasantly audible in the mix, and overall the drums are on the front of the scene with the guitars. As stated previously, this band plays with a lot of momentum so you're always in the middle of the action, with the feeling of treading forward. The upside of having no dead times and a short length is that it's a doddle to get through, and to be amazed by all these crazy riffs for half an hour.

I'm gonna conclude the same way I ended my Cauldron review: it's really cool to have a bit of fresh air in the heavy metal department. Nowadays we only have big muscle bands with over-compressed production, playing riffs on one string, and with what I think is the wrong mood. Or OSHM bands copying the most hackneyed stuff from the depths of the 80s. And when at last comes a solid release to headbang your spleen away, nobody cares about it but me... Like we've been mocking Haunt for the whole year, but kept checking every record they put out. Why don't we turn our eyes towards Lord Fist a little bit?
Written by Ansercanagicus | 14.02.2021