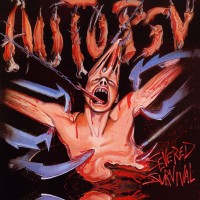 
I can assure you that every contemporary, OSDM-loving band exists with the sole purpose to release one day something as grand as Severed Survival.

Autopsy were formed in 1987 by Chris Reifert who played drums on Death's Scream Bloody Gore. When he and Chuck Schuldiner parted ways, Chris went on to start a band that had similarities with Death but also bore a very own distinctive sound. Autopsy were the pioneers of doom death metal as we later came to call it (back then it was simply called death metal), and Severed Survival - recorded in January 1989 - is the full-length album that really introduces this style to metal fans in all its glory.

Severed Survival is not a masterpiece only due to how original and trend-setting it was, but also due to its stellar song-writing. At first, Autopsy change the tempo frequently within songs, which makes the album engaging throughout. They squeeze in groovy parts, doomy parts, and also faster - and somewhat punkier - parts but the pace never reaches the frenzy of Altars Of Madness, for example. "Critical Madness" is probably the song I'd suggest to someone for an idea of what this record is about.

Another big plus is that there is nothing here that doesn't belong. There are no keyboard intros, no atmospheric interludes, no filler. "Disembowel" begins with Reifert growling as soon as the first note hits. No mood-setting or building up to something, just pure assault. The title track has an insane solo and when that solo ends, so does the track. Today, a band would add another verse or a bridge or a chorus but Autopsy probably thought something like "fuck that, the solo is over and so is the song". Death metal the way it is meant to be, this is Severed Survival in a nutshell.

As already mentioned, similarities with Death can be traced which is only natural since Reifert had a part to play on Scream Bloody Gore; the amazing "Ridden With Disease" in particular will confuse you as to which band it really belongs to. But unlike Death and countless other bands who went to Tampa to record clean-sounding albums at Morrisound Studios (Autopsy came to life because Chuck left San Francisco to go to Florida but Chris denied to follow him), Autopsy recorded at Starlight Sound in California. And it was a very wise choice.

The production by John Marshall, who used to be a roadie for Metallica and also replaced Kurdt Vanderhoof on guitars when the latter left Metal Church, is just what the doctor ordered; filthy, analog-sounding, and giving a sludgier tone on the guitars but also a muddy/sloppy/loose sound on the hard-hitting drums which is simply fantastic. Steve DiGiorgio's bass is particularly audible and another one of the reasons why this album sounds as great as it does. Steve was in Sadus and he was the best bass player in extreme metal at the time, and Autopsy were tremendously lucky to have him as a session musician because this album wouldn't have been so special without him.

The band's second full-length, Mental Funeral, is another masterpiece of death metal. But, in my opinion, Severed Survival comes out on top simply because it influenced almost everyone back in the day either musically or conceptually; Cannibal Corpse, Asphyx, or Entombed are some of the obvious ones. But also listen to "Charred Remains" at 2'07'' to find out how the riff for Carcass's "Corporal Jigsore Quandary" was born. Or check out the melody at 2'41'' of "Pagan Saviour" and you will hear where Paradise Lost's Gregor Mackintosh got the motivation from for his leads in the early days.

This album is so perfect that it does not have just one but two superb covers and each is horrifying enough in its own right. The original one by Kent Mathieu was inspired by the film Hellraiser and shows some poor guy being torn limb from limb by big metallic hooks. It was not very well received in Germany so Peaceville decided to make an alternate version in order to get more distribution in Europe, and this is how Kev Walker created a POV illustration of what must be a zombie autopsy.

The years between 1989 - 1991 were extremely fruitful for death metal and offered some of the genre's best albums of all time. Severed Survival is one of them.