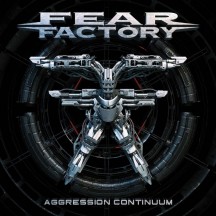 
And the beat goes on.

Given the drama surrounding Fear Factory, it is no surprise that Aggression Continuum is one of the most anticipated releases of the year and, for fans of the band, a chance to hear the first new music from the band in half a decade. To finally set aside all the drama leading up to this album's release and let the music do the talking is what we are all here for, and thankfully Fear Factory got that memo too, with Aggression Continuum being the band's best work since Mechanize and an album that should re-energize anyone who hits play.

Continuing a long-running trend of the band's albums having stellar opening tracks, "Recode" starts Aggression Continuum off on a strong foot, with a cinematic opening that builds into a kickass track that will have you moshing so hard you could crush the Terminator between you and any would-be circle pit participant. Featuring tracks like "Purity" that play best to the band's strength as a whole, the songs are complemented by excellent use of keyboards; the latter is a common theme throughout the album, with "Monolith" also having a captivating keyboard presence. Cazares' trademark precision razor-sharp riffing is all over the album, giving tracks like "Fuel Injected Suicide Machine" that cutting edge that makes a classic Fear Factory song.

Perhaps the strongest element to Aggression Continuum is its production; shimmering like newly polished chrome in the sun, the album sounds sharp and powerful, which adds to the atmosphere while also ensuring that the band crush the skulls of listeners like their headphones were in fact a hydraulic press. While it lacks the nihilistic ominousness of a Demanufacture, its pinpoint perfect precision more than compensates for this and produces some excellent moments, such as on "End Of Line" and "Manufactured Hope".

With that said, the remaining members of Fear Factory are on top form. While the delay to the album's release was unfortunate (owing to a desire to have live drums over programmed drums), it was worth it, with the album benefitting from the solid drumming performance of Heller and a welcome swerve from the pothole The Industrialist fell into with its programmed drums, which tracks like "Cognitive Dissonance" can attest to.

For those who were unaware or stuck in a vault for much of the previous year, the readout on your Pip-Boy should notify you that there is a file missing, that is, Burton C. Bell, who left the band after finishing his vocals in 2017. While I am sad to see him exit the band given how much of a cornerstone he has been, I can't help but feel underwhelmed by some of his vocals here; his voice lacks the power to really push his parts and is often over-reliant on vocal effects to a fault. Tracks like "Collapse" unfortunately only highlight this, and as a result it weighs the track down. "Disruptor" is in a similar position, though even had he been at full power it wouldn't have salvaged what is an otherwise generic-sounding track by the band.

If Aggression Continuum proves to be the bookend to this chapter in the band's career, then it can be said that it ends in style. While a lot has changed in five years, Fear Factory seem as relevant as ever, moving ever closer to the overarching technological dystopia the band war against while producing a sound that sounds just as good now as it did thirty years ago. It's an album that is thankfully worth the wait and hopefully one that launches the band into their next phase on a strong foot.

Written on 19.06.2021 by
omne metallum
Just because I don't care doesn't mean I'm not listening.
More reviews by omne metallum ››