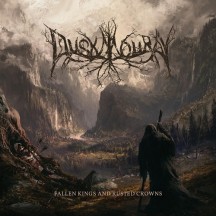 
Yup, this is that album. You know the yearly album that comes out of virtually nowhere to take over the world. 2021 needed this. It is Amorphis and Be'lakor wrapped into one monolithic offering of crushing pleasantness that is sure to please 80% of our readers and leave the other 20% shaking their heads (Official poll results remain to be confirmed). Duskmourn, a yet unsigned band from the East Coast of the USA, have done it again with their third album entitled Fallen Kings And Rusted Crowns. Whatever I will say here will likely get me crucified since this is the kind of album that shall get labeled as "absolute masterpiece" by the masses. But hey, the masses are not often wrong.

Duskmourn is essentially two dudes doing everything yet somehow you cannot spot that in the final mix. Like spawns of Tuomas Saukkonen [Wolfheart], Walter Deyo (guitars, bass, vocals) and Bill Sharpe (guitars, drums, keyboards) managed to sonically clone themselves through the magic of recording, and call it a day with a mystical smile on their faces (as per my anonymous source who wished to remain anonymous). From growls to guitars, bass, keys, drums and whatever else is thrown in there to create a symbiotic melodic death opus with folkish influences, Duskmourn feel like a solid band with a bright future.

The title track is all kind of awesome in its Amorphis-ness. "The Sleeping Tide" mix of harshness and catchy melodies can only evoke greats like At The Gates and October Tide while "Deathless" and "Blood Of The Forest" have a folkish progression that makes me think of the best tracks ever released by Amon Amarth, something about the power of Odin, unstoppable marches and cunning crows, or even Moonsorrow, which would mean something about the force of nature, the power of frost and the unwavering grasp of death on all human life. You get the gist. And while "Mountain Heart" has that Wolfheart vibe, tracks such as "Among The Ruins" and "In The Chamber Of Incantation" are definitely more reminiscent of recent Amorphis. The killer closing track "The Harbinger" throws in some more folk with an intro that brings to mind Skyclad and then it quickly morph into the greatness that only a band like Be'lakor could achieve (until now).

Not unlike Agalloch, discovering Duskmourn through this later album forced me to explore their earlier releases, and, not unlike Agalloch, there is gold and platinum to be discovered respectively with 2017's Of Shadow And Flame and 2014's Legends. So if you have never heard of them before, please park a few hours aside and do their whole discography justice. You won't regret it.

Maybe falling short of being a true masterpiece, perhaps 4 out of 5 rusted crowns, but still an intense, unrelentingly and near perfect melodic death record by the standards of our time. It is firing on all cylinders and hitting all the required spots. The short running time of 47 minutes of Fallen Kings And Rusted Crowns is hardly a factor since the quality is very high throughout. Inspired by the best bands in the genre for the last 10 years, this is THAT album.

Written on 17.07.2021 by
Dream Taster
Bringing you reviews of quality music and interesting questions such as: