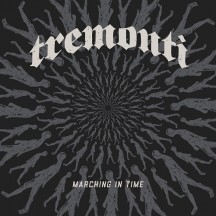 
The journey continues for Mark Tremonti's solo project. It could be categorized as a mix of heavy metal with radio rock influences. It is fairly similar to Alter Bridge, just sans the "other guy" who happens to be Miles Kennedy, and well, most of the other folks who happen to be in that talented band. So we are looking at a de facto lower score on the technical progressive classic rock scale and more of an emotionally-charged heavy metal experience, which sounds like a good thing, right? So, where does that bring us?

It is definitely heavy metal with a radio rock vibe and mad skills. The low guitar tone is crushingly powerful, and the overall guitar work impressive as usual. The vocals are surprisingly top notch, provided you have never heard of Mark's previous albums that is. The guy can sing. So much so, he is up there with the best ones in my book. The songwriting is mostly direct and at times not so much, but the overall goal is to instant gratify and it does that to perfection. His trademark accelerating tapping solos are aplenty. Perfectly supported by bandmates Eric Friedman (guitars, bass, vocals) and Garrett Whitlock (drums), Tremonti are killing it.

Whether it is the groovy rocking opener "A World Away", the bluesy folk Americana of "The Last One of Us", the standout power tracks such as "Let That Be Us", "In One Piece", "Under The Sun" and "Would You Kill", the folksy radio rock ballad that is "Not Afraid to Lose", or the epic killer "Marching In Time", this album cements Mark as a singularly skilled singer/songwriter.

The other thing that I respect with Tremonti: Those records never seem to end. No half-assed sessions, "we are walking in and we are recording twelve tracks minimum guys". The rocking on keeps on grooving until you can barely remember the first song anymore. But hey, that's one out of the old classic playbook.

Where Marching In Time fails to make a mark is if you start comparing it to the epic songs from Alter Bridge. But, let's be kind and take this at face value. For being a straight heavy metal offering, Marching In Time is one hell of a monolithic, intense, compelling piece of music with an unequaled guitar tone to boot. The album achieves its goal for a kick-ass heavy metal/radio rock fusion. Perhaps it falls short of its predecessor A Dying Machine in terms of sheer intensity, which was itself a cannonball of a record. However, if you are hunkering for Americana with a modern twist and a killer singer/songwriter/guitar player, this is most definitely the album for you. I, for one, will "now and forever" be grateful for every Tremonti album. And Marching In Time is definitely bringing it. So keep 'em coming Mark.

"I am not ashamed of the scars that define me...."

Written on 16.10.2021 by
Dream Taster
Bringing you reviews of quality music and interesting questions such as: