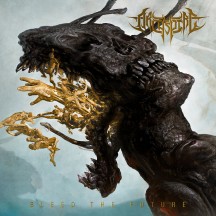 
I know we like to joke about tech death and technical wankery, but holy shit!

Believe it or not, Archspire was actually one of the first modern technical death metal bands I got into. I was a pretty big Death fan already, but I didn't really listen to a lot of modern stuff. Sure, I knew Nile and other big names you couldn't always really call tech death bands. So before I listened to Necrophagist, Obscura or Beyond Creation, I had a friend recommend The Lucid Collective. It was during a moment when we'd have a friendly black metal vs death metal rivalry, but even so, that album quickly became a springboard into other stuff. The years have passed, and my relationship with tech death dwindled. I feel indifferent to most stuff, but I'm always glad when someone pushes the envelope.

Now I have to admit that Relentless Mutation is a better album than The Lucid Collective, but arrived in the part of my life when even the familiar name didn't really move me for the genre. Giving it a relisten now, for the purposes of this review, I feel like slapping myself. And giving Bleed The Future multiple listens, I remember the adrenaline rush you feel when you first realize that music can sound like this. Fast, relentless, brutal, so on and so on. I feel like now I am seasoned enough in tech death that things don't really get me that excited anymore and I'd like to think that I can set apart the middling from the gems. I heard my fair share of death metal that is fast, intricate, brutal, suffocating, and I'd argue that Archspire don't really come out as absolutely on top of the game in any of those. Instead, I think what's really fascinating about Archspire is their sense of flow.

Let's start with the vocals, since I assume that's the more obvious talking point. Oli Peters has a cadence that is often more reminiscent of technical and lyrical rappers (think Tech N9ne) than usual tech death vocalists, so the music also follows suit in building around that sense of flow that feels a tad unusual for tech death. And though I did say that I have heard bands even more intricate, there's really not much more you can ask from Archspire in terms of technicality and precision. There's an amazing cohesion between everyone involved, that only works with the way the production applies its polish in a way that would make most bands sound artificial, but Archspire benefit from that feeling of inorganic. It's loud and crowded, but, in a way, this is how the record is supposed to feel.

And a lot of times in tech death rhetoric, technicality is considered at odds with songwriting, meaning that the flashier a band gets, the less it seems like they care about the actual songs. Archspire are flashy, therefore soulless technical wankery. But then, why is so damn intoxicating? Even for a band that goes so above and beyond in all things tech death, there's a subtle sense of melody to it too. Melody that works more as a result of that flow I talked about rather than as a melodic sequence of notes that is memorable. I'm not yet sure how to stack Bleed The Future against the previous two Archspires, but what I can say now is that they certainly haven't plateaued yet, and I'm not sure what else you could possibly ask for a tech death album. Less is more. But sometimes more is more.

Written on 02.11.2021 by
RaduP
Doesn't matter that much to me if you agree with me, as long as you checked the album out.
More reviews by RaduP ››