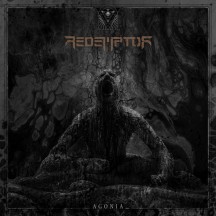 At many steps of death metal evolution, there’s been a Polish band making their presence felt, whether it be Vader during the early days, Behemoth bringing black and death metal together or Decapitated pushing the brutality of tech-death. Now, among the growing wave of bands within the genre fighting against ‘dead horse’ old-school revivalism or the relentless pursuit of brutality/technicality, Redemptor offer up their own spin that, whilst not reinventing the wheel, continues the expansion that has been occurring within recent years.

So, what are Redemptor doing exactly on Agonia? Well, it’s a sound that is somewhat progressive, somewhat dissonant, somewhat technical, without being excessively so for any one of these. At times, they’re building on the work of Ulcerate, and at other times it sounds like a more dissonant and less technically-minded Obscura. They can be atmospheric, oppressive or even slightly epic at times, and all of this sits next to each other in a natural and complete package.

“Tectonic Plates” starts off in an eerie matter, clean dissonant chords hinting at the malevolence to come, with similar textures bookending some mean, grim grooves. The chords and progressions used on the album are more often than not dissonant in some manner, but Redemptor do weave subtle melody in at times, such as the solos on “Potion Of The Skies”. It’s hard to not look past Ulcerate during portions of the album, but there’s also Gojira-inspired pick scrapes and grooves, and occasional dabbling with symphonic touches, such as the background choirs during “Further From Ordeal”. There’s even a complete break from metal during the acoustic interlude “Aurora” and the introduction to “Les Ruines De Pompei”, which subsequently closes off the record with more choirs and some emphatic riffs.

That’s a lot of different ideas and strategies implemented into Agonia, and thankfully they’re implemented with style by Redemptor. The riffs sink you into a groove or kick you in the face with more abrasive rhythms and dissonance, the post-metal atmospheric inclinations pull you further into the record, and the brevity of the symphonic flourishes only amplifies their impact. It's similar enough to some of the bands that have been setting the groundwork for this ‘post-death’ landscape of proggy atmospheric dissonance to draw parallels, but distinct enough to shine by its own merits. More than anything, it’s just a really good album.

Written on 19.12.2021 by
musclassia
Hey chief let's talk why not
More reviews by musclassia ››