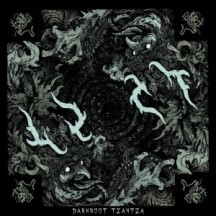 
Some metal albums really make you think “damn, do I love drums”.

Darkroot Tzantza is the debut record from Ecuadorian death metal group Mathan. Although South America has a respectable legacy as part of the metal scene, Ecuador has not particularly contributed on that front; there are only 5 entries from the country in our database at present, with the most popular having a total of 3 fans. Maybe Mathan could be the band from the country that makes a breakthrough and marks Ecuador on the metal map; certainly, the potential is there, based on Darkroot Tzantza.

Mathan are stated on their social media to be a duo, with Pucho on vocals and Damian on guitars. There’s clearly something missing from this line-up, because from the very first song, the instrument that really stands out on this record is the drums, and I really want to know who is responsible for them. Mathan are a death metal band, perhaps closest to somebody like Nile in terms of tone out of the biggest names in the genre; powerful guitar tones convey brutality and groove, while Pucho unleashes primal growls. However, it is the drumwork that turns Darkroot Tzantza from just another disposable death metal debut into a genuinely notable record.

Alongside the expected double bass rolls and blast beats, there is a huge amount of tribal-influenced tom-heavy drumming throughout the album on pretty much all songs. In the making of documentary for the record, Mathan emphasize the importance of percussion in their writing, in their attempt to really bring Amazonian culture to the fore of their sound. They discuss the challenge of not abusing these tribal musical elements and saturating the record; if I could give any advice to them for the second album that they will hopefully make, it would be to be liberal and really push how much they could incorporate, because everything that is featured in Darkroot Tzantza sounds fucking great. The rampaging, thunderous drum patterns work perfectly above both the brutal riffs and the slower, more atmospheric moments, with both evidenced right out the gates on “Voracity”.

There are three tracks that are the most ambitious in the execution of this Amazonian death metal sound. The introduction track “The Occult Side Of Nature” has the luxury of being able to slowly work its way towards something that approaches metal, with droning horns and extensive percussion gradually intensifying with some sinister, noisy guitar leads hinting at the explosion that is to come. In contrast, the two longest songs on the album, “Arcane Voodoo” and “Cvlt Of Doom”, are full-blown death metal tracks, but both incorporate the tribal influences in intelligent ways. On top of the engrossing percussive work that features throughout, “Arcane Voodoo” incorporates some ominous ambience and aggressive spoken word that amplifies the dark atmosphere of this track. “Cvlt Of Doom” makes its own impression by opening with acoustic guitars, and later on by making good use out of group chanting. On an album full of bangers, these two songs are the highlights for me.

As attention-grabbing as the drums are, there is plenty more to Darkroot Tzantza. The really frenzied and guttural approach to the vocals from Pucho feeds the primal feel that the album has, while Damian delivers plenty of quality grooves and hooks, as well as nice dark leads that build the atmosphere of the album. He also has his fair share of solos, most of which fit really nicely with the album; if there was one thing that I was not completely sold on here, it would be the solos that are performed by other guitarists on the record. “Breath Among The Death” features a solo from Dutch guitarist Mendel, one that generally fits, albeit with a slightly awkward flow at times. Less fitting is the solo on “Devourment” performed by Joel Omans from Rings Of Saturn; perhaps it’s just me, but I really don’t see how the hyperspeed wankery of Rings Of Saturn is a good fit with Mathan’s sound.

Mathan aren’t the first extreme metal band to incorporate Amazonian themes and musical influences; Sepultura featured tribal percussion on Arise over thirty years ago. However, I’m struggling to think of a death metal album as aggressive as this that has featured drumming that is so emphatic or so persistent in the way it incorporated tribal patterns, and the result works so well. By having the songwriting chops to deliver on the promise of this idea, Mathan really knock it out the park on their debut.

Written on 21.01.2022 by
musclassia
Hey chief let's talk why not
More reviews by musclassia ››