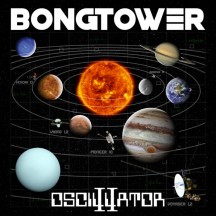 
What is it about metal bands, the solar system and extremely long albums?

At least Wanderers: Astrology Of The Nine had the excuse of being a collaboration/split record, so most of its two hours were Spectral Lore and Mare Cognitum trading separate tracks. On Oscillator II, it’s all on Bongtower to keep things interesting for 95 minutes. The Russian group have had an intriguing discography so far; a fairly classic-sounding stoner doom debut was followed up by a first venture into outer space with Oscillator in 2020, an album that incorporated spoken word, samples and sound effects into a hefty psychedelic stoner doom sound that bore similarity to Ufomammut and similar acts. Less than six months later, Bongtower dropped Last Summer Days, a lighter, less doomy album where the growls of Oscillator were replaced by the clean singing of Anna Pisarenko. As it turns out, Pisarenko seems to have been a one-off collaborator, as on Oscillator II, Bongtower have brought back Evgeny Badaev (who performed on 2019’s Live At Les Villa record) for their next journey into space.

Unsurprisingly, Oscillator II is very similar to Oscillator. Dedicated to Carl Sagan, the album, whose story is centered on the planets of the solar system and some of the more notable probes sent into space by mankind, features extensive spoken word narration (again courtesy of Evgeny Rumyantsev) during the songs titled after said probes, typically accompanied with psychedelic sound effects. For the most part, these tracks are shorter interludes between the main planet-named songs (“Pioneer 10, 11” is even something of a short-but-sweet jam), but they do occasionally tests the limits of patience, such as with the 5-minute “Venera 13” and “Voyager 2” (however, space nerds may enjoy the stories). These spoken word sections are sandwiched between massive-sounding psychedelic stoner doom songs, once again sounding reminiscent of Ufomammut, as well as some of Electric Wizard’s earlier, gnarlier material.

Now, 90-odd minutes is a lot to ask listeners to sit through on a single album, and plenty of records have failed to justify similar runtimes in the past. How does Oscillator II fare? Well, on the one hand, I think it’s probably fair to say that the album doesn’t really justify running on for so long; there’s nothing so original or exceptional about what Bongtower do to test the limits to this extent. On the flip side, of all the metal genres in which to stretch things out in this manner, I think stoner doom is probably one of the most appropriate. It’s already a genre that is typically expecting you to get lost in and zone out to the dense fuzz, particularly if things are taken in a more psychedelic direction; I’d much rather listen to a stoner doom album of this length than Harakiri For The Sky pumping out similarly extravagant blackgaze albums. What’s more, whilst they aren’t doing anything revolutionary here, Bongtower know how to write some satisfyingly dense, hypnotic tracks.

As much as the album is long, I don’t think it’s a case (unlike Harakiri For The Sky) where the songs themselves are overly long; my highlight of Oscillator II is actually probably its longest song, “Mars”. (What is it about Mars and good music, anyway?) It’s an immense song, one that fluctuates between more mellow, psychedelic jamming and huge riffs, including one absolute beast that Bongtower groove on for a solid three minutes in the middle whilst unleashing some sick guitar solos and sound effects. On top of “Mars”, there are the likes of “Jupiter”, a single-minded beast driven by a central, droning riff, and “Uranus”, which opens with some nicely emphatic tom-driven drumming. There is a bit of variety on the album as well, as “Saturn” is a up-tempo bruiser, on which the growled vocal approach that is used for most of the album makes most sense.

Oscillator II expects a lot from listeners (not least by following the peculiar trend set by Oceans Of Slumber and Harakiri For The Sky by ending a super-long record with a cover song, albeit an enjoyable rendition of “Alpha” by Vangelis in this case), but it pays back in equal measure; the production is excellent, giving everything the weight of eeriness that it needs, and there’s some quality tracks on here. Arguably one for the genre diehards, but also, if you just need something heavy and fuzzy to occupy the background for a couple of hours whilst working, you could do much worse.

Written on 24.01.2022 by
musclassia
Hey chief let's talk why not
More reviews by musclassia ››