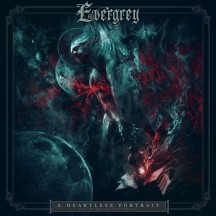 
The last time that Evergrey had this short a gap between records, they followed up Recreation Day with The Inner Circle, so omens are good for A Heartless Portrait (The Orphean Testament).

Across a career that’s now lasted for over 25 years, progressive power heavyweights Evergrey have had their share of comings and goings in their band, but their current iteration is the most stable line-up that they’ve had in, well, forever. That stability has paid dividends, as a streak that was kicked off by Hymns For The Broken has been followed by The Storm Inside, The Atlantic and last year’s Escape Of The Phoenix, all of which have been very capable records with their fair number of brilliant moments. Scarcely a year after Escape Of The Phoenix, and Evergrey have delivered their thirteenth full-length record, and it turns out that this was not an unlucky one for the Swedes.

In Nik’s review of Escape Of The Phoenix last year, he mentioned that Evergrey currently seem incapable of dropping a bad album, but also that they’ve not necessarily released a stunner in recent years, at least in his eyes, and I mostly share those views. I’ve heard every album since the release of Hymns For The Broken and enjoyed all of them, as the band’s mix of moody, emotional prog with soaring prog works very nicely, yet none of them have had a tracklist of consistent top-tier tracks to keep me returning to them. However, despite the quick turnaround time in the wake of Escape Of The Phoenix, I feel that A Heartless Portrait (The Orphean Testament) is probably the closest that they’ve got to that kind of breakthrough since the assembly of this current line-up.

It’s not a flawless tracklist, but I feel pretty comfortable saying this has the highest proportion of tracks that grab my attention and refuse to let go out of any I’ve heard in recent years from Evergrey. If you want an example of such a song, look no further than opening track “Save Us”; it’s a song that already makes a strong first impression with a surprising degree of heaviness and intensity as it bursts in, but when that incredibly powerful chorus makes its entrance, it immediately launches itself towards the top of my all-time favourite Evergrey songs list. If you can listen to “Save Us” more than twice and not get swept up in the emotion when Tom Englund belts out the song’s central hook, I don’t want to live in your world.

Beyond that song, quality tracks continue to arrive, and something that really works to Evergrey’s favour with A Heartless Portrait (The Orphean Testament) is how evenly paced out those highlights are. A couple of entries later on the tracklist comes “Ominous”, a spacious, brooding and emotionally resonant cut that hits right in the right moments, whether courtesy of the guitars or the vocals. Other songs that made very positive impressions included the simple-yet-effective synth-heavy chorus of “Call Out The Dark” and “The Great Unwashed”, which features some lush and deep-cutting melodies. The last cut worthy of special praise on A Heartless Portrait (The Orphean Testament), and the only one that rivals “Save Us” for my top track, is “Blindfolded”, a song that really emphasizes how excellent Evergrey can sound when they inject some more energy into their tracks, as the driving, muscular energy of the verses gets the blood pumping in scintillating style.

Perhaps that last song leads into why I’m not quite ready to slap an AOTY-contending score on A Heartless Portrait (The Orphean Testament); as much as I enjoy this album, I do feel it still has the issue with album fodder-worthy songs that I’ve felt with all their recent records. Perhaps that is harsh, as “Midwinter Calls” is actually quite a decent example of a more mid-tempo stomping cut, and there are things to value in the likes of “Reawakening” and “Heartless”. However, at the same time I find them quite easy to overlook when considering the album as a whole. I don’t know whether I would include the closer “Wildfires” in this category; the soft acoustic outro might be something of a trope now, and not one that Evergrey necessarily nail here, but this outro piece can be quite evocative. Overall, my feelings towards Evergrey in the past decade have been that there’s enough songs across all the albums to make a decade-defining masterpiece, but each album by itself hasn’t completely taken me, and that still is slightly the case here, even if I think a hypothetical greatest hits album in that vein would be very healthily represented by tracks from A Heartless Portrait (The Orphean Testament).

One of the masters of emotionally resonant progressive metal, Evergrey have proven themselves to be evergreen with their form in the past few years, and A Heartless Portrait (The Orphean Testament), rather than showing any signs of decline, only makes this current stretch of records shine even more brightly. How it stacks up against the turn-of-the-millennium classic albums, I’ll leave the more dedicated fans of the band to debate, but anyone with an inclination for this band’s sound will find their latest to be one to savour.

Written on 18.05.2022 by
musclassia
Hey chief let's talk why not
More reviews by musclassia ››