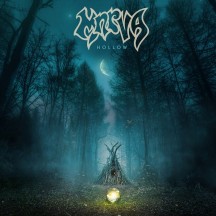 
‘Hollow’ is unintentionally a somewhat apt description of the experience of listening to Hollow.

MNRVA are an American three-piece who reside within the Venn diagram overlap of sludge, stoner and doom metal. In the promo blurb for their debut record, Hollow, their sound is described as an experimental twist on the sludge doom template, bringing influences from Melvins’s guitars to Mastodon’s vocal interplay, with intense overdrive and a garage aesthetic. It was an intriguing sell, and combined with the enticing artwork, I was enticed to give it a try. Ultimately, I don’t really hear where the experimental twist is, as the sound of this album felt intensely familiar. However, it still works… up to a point.

Of that aforementioned Venn diagram trio of styles, Hollow is closest to sludge and then doom. With dirty guitar tones, Southern guitar leads and slow sludge riffs, “Not The One” is every bit a genre piece. In contrast to plenty of bands in this style, however, MNRVA opt for a sung rather than screamed approach vocally, even if those vocals are somewhat distorted around the edges. “Not The One” is a pretty rudimentary example of the style, and it’s not a knockout blow such as “Litmus” on Hollow Leg’s similarly straightforward Civilizations, but it does the job and the sound is appropriately dense. “With Fire” carries on much in the same vein; in contrast, “Third Eye” brings the stoner metal part of the Venn diagram more into the equation, with a more melodic tone to the guitars and a very satisfying guitar solo near the end.

As an opening trio of songs, this bunch is fairly unremarkable, but they’re also well-produced and well-written, and one gets the impression that Hollow will be a by-the-numbers but ‘scratches that itch’ kind of album, one that doesn’t inspire replays but brings a good time while it’s on. After that point, however, I find myself straying from this line of thought. The problem with being a middle-of-the-road genre album, particularly in a genre that is saturated with competing bands, is that it takes a while to build goodwill and seconds for one to lose interest; it’s easy to overlook flaws in ambitious or brilliant albums, but if you’re already struggling to stand out from the pack, adding in frustrating or irritating moments is like sending an invitation to the listener to move onto a competing band’s album instead. On Hollow, after that aforementioned three songs, MNRVA repeatedly introduce parts of songs that disrupt any momentum that the album could otherwise build.

It starts on the title track; what is a trudging but groovy slab of dirty fuzz is undermined by the vocals. On the one hand, it’s a bold approach to opt for clean (well, relatively speaking) vocals when one could easily whack some roars or growls in instead; however, if you’re going to introduce tonality into vocals, it needs to work. Conversely, the back-and-forth in the chorus of this song absolutely misses the mark, and with it a song that was accomplishing little more than passable entertainment as it was is sunk. It’s mostly due to the awkward phrasing and lack of melodic direction, but the gremlin-esque tone of one of the vocalists also doesn’t help matters. From this point onwards, it’s a persistent issue; the verses of “Befall” sound sloppy and clunky, and the chorus of “Black Sky” just feels like a reprise of the one in “Hollow”.

These moments could have been overlooked had the surrounding songs otherwise compelled, but for long stretches, the riffing is too conventional and one-dimensional to be memorable, so one isn’t inspired to battle through. I will say, both “Befall” and “Black Sky” have some nice development in their second halves, both broadening out into either more sinister or more melancholic territory before diving into solid guitar solos. It’s much the same story with “No Solution”, an unremarkable trudge that only brightens up when the lead guitar takes center stage. By this point on playthroughs, I’m already becoming impatient for the album to end, and yet the closing song “The Way” is probably the least appealing of the lot, feeling thoroughly undercooked with its tedious central procession even without the irritating exclamations bookending it.

The extent of the negativity coming through right now is likely due to the sheer number of replays I’ve given Hollow; I’m quite vocal on this site about being a fan of stoner and sludge metal, and have happily sat through plenty of by-the-book albums that likely would have similarly tested my patience under closer scrutiny. Hell, I liked this album decently enough on my first playthrough of it. However, in a world where there’s already far more albums in any single niche of metal to easily digest them all, let alone taking into account all the other styles of metal and the grand world of non-metal music, I can’t recommend an album for being a serviceable bit of fuzzy sludge that is only occasionally annoying. I like the lead guitar work on this album, and it does get off to a decent start, but overall MNRVA’s debut album is a swing and a miss for me.

Written on 19.05.2022 by
musclassia
Hey chief let's talk why not
More reviews by musclassia ››