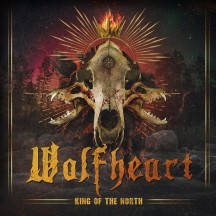 
The same Wolfheart you love, now with a sharper edge. Album number six showcases more of their trademark high-quality melodic death metal with the intensity of thrash metal. While their previous effort Wolves Of Karelia set an aggressive, menacing dark atmosphere, King Of The North embodies runic power and fire.

Mastermind Tuomas Saukkonen is back in full force with his characteristic playing style and powerful growls. Vagelis Karzis of Rotting Christ fame is the perfect complement to Tuomas on guitars. Joonas Kauppinen,s flair behind the drumkit is now part of the band,s DNA. So is Lauri Silvonen,s prominent bass guitar sound. Some distinguished guests are featured on this album. Killswitch Engage's Jesse Leach adds his vocal power to "Ancestor" while Nile's Karl Sanders shines on "Cold Flame".

It feels like the band have added more diverse elements than ever before in the songwriting. Background vocals a la Therion and some clean vocals on the opener "Skyforger" are a testament to that. The ebb and flow on that track is exceptional. It starts slow, speeds up, slows down, speeds up again and loops back to the beginning, thus creating a tapestry of memorable moments. There is definitely something to be said about those extra elements on each and every song on King Of The North.

Not only that, but the overall flow of the album is well-designed. It feels more organic than on Wolves Of Karelia due to the amplitude of the sound. Songs such as "The King" and "Headstones" add a bit of tempo variation that only renders the album better. Arguably it is hard to pick highlights with nine adrenaline-packed tracks of such quality, but "Skyforger" and "Knell" embody the essence of King Of The North best. The overall replay value is definitely heightened by pockets of "wow I need to listen to this part again".

Wolfheart's songwriting has reached new heights on King Of The North. This album keeps the flame alive and solidifies their supremacy and their legacy. In terms of intense melodic death, Tuomas has managed to carve a niche over the years. His vision has now been firmly turned into a full-blown band that feels like a solid unit. Napalm Records have another winner in Wolfheart.

Written on 24.09.2022 by
Dream Taster
Bringing you reviews of quality music and interesting questions such as: