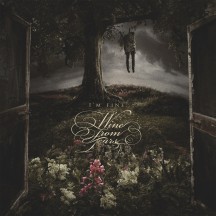 
This review of Wine From Tears is brought to you by Bitter From Beers. When last I left them they were Glad To Be Dead but they’ve returned from beyond the grave to tell us all I’m Fine.

First, it’s one of my reviews, so we all know some sort of food analogy is incoming. Take a drink, everyone. So let’s go with beer – both for culinary analogy and beverage. Whether here in Brazil or back home in Gringolandia there are some breweries that make stellar cerveja. We’re talking “Trample The Weak, Hurdle The Dead, Buy On Sight” level. Others make great beer you are always happy to see, even if it's Plan B. Then there are macro breweries which mass produce a beer-like substance that is fine to guzzle when served ice-cold while lounging on a beach or playing beer pong.

Between the latter two lies another level. When in Germany this summer I was lucky enough to run into both Starvynth and corrupt, and we drained muchos beers talking all sorts of metal things like bedding chicks, slaying dragons, database organization and the best oil for greasing up before a Manowar gig. One of the two referred to one of the beers on the menu, Bitburger, as brewed to be inoffensive and thus a safe beer for everyone.

And doom bands are a lot like beer in the sense that you can find them all over the place, there are some sitting up there at S Tier. (Old man references, popular thing on YouTube! See kids, I’m hip! And I don’t mean hip replacement. Yet.) There are some other great ones, some that are like Natty Light, you’ll listen to only when a friend hands it to you at a party and Insists (with a capital “I”). And then there are the Bitburgers of doom.

Wine From Tears from Samara, Russia are Bitburger. The sound, like Glad To Be Dead before, is lush and great. From the opening track, I’m Fine embraces you like a warm blanket on a cold (COld?) night. Generally speaking, the tracks go down smooth, and you’ll enjoy them.

The approach is similar to a lot of what I heard from Solitude Productions. The production is great as always. Songs are all somewhere between 6 and 10 minutes. Clean tones, harmonic leads, distorted power chords. Vocals are split between death-doom growls and cleans. Standard fare, but all in all executed in a way better than fine.

I will say that while the bulk of the tracks are good, this 10-pack of Russian doom does have a couple skunked cans. “No Future” is good enough intro and verse, but the music of the post-chorus sort of falls apart and not a fan of the sort of bored injected female vocals just blandly stating “No future. No future.” I get the artistic point – the quiet quitting or let-it-rot ambivalence towards work/life success… It's just, I’m an old Gen X’er and when venting about lack of opportunity I prefer Johnny Rotten’s approach to the same lyric.

“Revolution Anthem” just seemed misplaced – more upbeat than the rest of the album in an awkward shift. But not so awkward as to be one of those jarring whiplash changes. It just didn’t click with me.

So yeah, not the most ringing of endorsements, nor the most damning of indictments. Tossing this one on to yer doom playlist is like tossing a sixer of Bitburger in with a bunch of other beers into your cooler for your next outing with friends. When it comes up, you’ll shrug, but won’t throw it back or skip the track, just enjoy it well enough before the next round.

It’s Fine. And it’s on bandcamp.