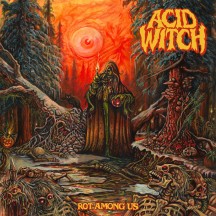 
Wow, is it that time of year again already? Well, have you got your costume ready yet? Because if you have and you're in the spirit for Halloween this year, then I highly recommend a little acid trip from the Witch with Rot Among Us, as it will surely help you on a strange and spooky path.

So here is Rot Among Us, the fourth full-length release by the crazed psychedelic doom metal band Acid Witch. Oh, and how convenient for this to be released in October of all times - I mean the month leading to Halloween, of course, an ideal time as you may have suspected due to the band's horror-based lyrical themes. They provide listeners with an unsettling, disturbing, and sometimes frightening, but always gripping, listen, which is exactly what they have done here, and even more so than usual, I might add.

With the term "acid" being used in the band's name, you would understandably expect a degree of stoner metal to be involved in their musical style, and, well, you wouldn't be wrong to think that; the guitar tone, for a start, has that fuzzy-sounding effect used by the majority of stoner metal bands. And yes, I know Rot Among Us is not exactly the most fitting album title for this band's particular scene and style - it's maybe a title that would seem more relevant or appropriate for a brutal death metal band - but there you go.

The album starts with a fascinating opener wherein you hear a talking witch, whom you hear again later in the album on "Gundella The Green Witch"; this is followed by a male voiceover, with a creepy, haunting synth sound playing in the background, all of which gives off a vibe of some sort of medievally inspired horror. At this point it may sound like the start of some kind of theatrical concept inspired by King Diamond, but if you think things couldn't get any creepier, just wait until you reach the track "Evil Dad"; it's very fitting for a stoner's Halloween party, I must say.

Much like previous Acid Witch albums, this is clearly heavy guitar-driven, whilst containing an abundance of synths and psychedelic keyboard sounds that play that vital role of creating an eerie, creepy, and disturbing sense of paranoia for the listener and that inevitably give off that haunting '70s horror movie vibe. Now I suspect fans of old-school horror movies would surely appreciate this, or maybe on the other hand find it a nuisance, which I hope is not the case.

The riffs are in a sense structured in the traditional doom-style manner, with the slow, melodic riff patterns having that low, sludgy effect, very much like bands such as Cathedral, and of course Black Sabbath, meaning they intend not to shy away from their traditional doom background at all, but rather embrace it all the more. That being said, there's certainly not just doom metal you will hear; like I said before, the tone is very much stoner-oriented, and you could also say they use an element of death metal, particularly in how they aggressively approach certain aspects, which I guess makes the structure that little bit more exciting, especially for those who are not at all yet familiar with Acid Witch. The vocals are very interesting: other than the occasional siren squeals like on "The Sleeper", there's a certain level of harshness about them, although not harsh to the point where you can confirm them as actual death metal growls, but very aggressive and also entertaining nonetheless.

To simply conclude, enjoy this album however you wish this Halloween, just be careful not to take your dose of Acid Witch too far; you don't want Freddie Krueger visiting you on a nightmarish bad trip, now do you?