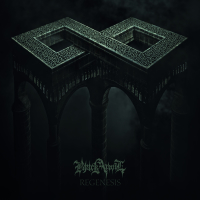 
Since their debut Time Insults The Mind in 2008, U.S. black metal band Black Anvil have pushed the boundaries of their dark gritty and edgy black metal capabilities, resulting in some of the finest music from the USBM scene in recent years. Has this band from the dark underbelly of New York done enough to carry on this fine form of theirs with fifth release Regenesis?

Their brand of music is intriguing to say the least; it's a style that combines the old-school rawness of blackened thrash metal in a way that harks back to the likes of Venom and Celtic Frost, along with an element of classic rock, in which you will hear influences from bands such as KISS. I must say it's very interesting to see how this band has developed their sound and style over time; they are one of those few black metal bands around that are forever striving forward, always experimenting and making bold and drastic changes.

With this album Regenesis, Black Anvil have really come into their own, bringing everything in their musical weaponry to the table, with riffs varying from traditional black metal tremolo riffing to classic melodic heavy metal riffing, alongside drumming that varies from typical blast beats to more rhythmic and complex beats; there are times in which the solos overlap the tremolo riffing. The most interesting aspect of all, though, is the vocals, which appear in two separate styles, one being harsh (uncannily similar-sounding to Rotting Christ's Sakis Tolis) and the other being clean singing, both of which blend magnificently well together between the harsh verses and clean choruses.

The manner in which they go about their song structures is irregular; the tempo for the most part is aggressive with a real sense of brutality, yet there are several times where they take their foot off the gas and slow things down a little. Despite the aggressive edgy tone, the production is thoughtfully mixed; there's nothing stripped back about this approach, and each element is able to shine in an epic manner, more like Behemoth than early Mayhem or Darkthrone, I would say.

The opening track “The Gates Of Brass” is an instrumental intro that simply acts as a teaser of what's to come for the listener before the explosion of "In Two" begins. You then have tracks like "The Bet'', which follows a fairly repetitive but highly melodic tremolo riff pattern in a style and sound that is similar to Watain. Now, for me, the main standout has to be “8-bit Terror”, an epic track with blackened post-rock influences and a memorable chorus. Another highlight is the midway track “Silver & Steele'', which is the most extensive song on the album, with a large chorus, thunderous drums and sludgy riffs.

Clocking at fifty minutes, this relatively lengthy album has all the menacing and sinister presence of Black Anvil's previous work, whilst being thoughtfully written and crafted at the same time. Black Anvil have once again proven to be one of the top USBM bands around right now, and Regenesis is arguably their crowning achievement to date.