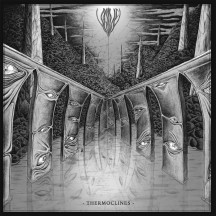 
Apologies to anyone who was excited about a new release from Valve and was subsequently crushed at yet another year without Half-Life 3.

Thermoclines is the sophomore release from French sludge band Valve (not the American video game developer), coming a leisurely 7 years after debut record Apnée. That’s pretty much all the background I can offer; they do give thanks to Ingrina in the acknowledgements section of the album’s Bandcamp page, so clearly they have good taste, but I've not really got much else to talk about aside from the music, so we might as well move onto that (for anyone curious, a thermocline is the transition in a body of water between warmer surface level water and cooler deep water).

With a title like that, perhaps one might have expected Thermoclines to lean in something of a post-metal direction, fluctuating between warmer mellow passages and emotionally colder extreme portions. As it is, for the most part, Thermoclines is a pretty consistently grim and uncompromising listen. Clocking in at nearly 40 minutes despite only containing 4 songs, these are some long compositions, but they don’t really depend much on ebb and flow in the post-metal vein, but rather Valve shift between passages of comparable bleakness. The record puts its best foot forward from the off with “XXXIII”, both its longest and arguably its best track. After the dark ambient introduction, the song kicks off properly with trudging doomy sludge, with some more vicious blasting slotted in as well. There are hints of more melodic stylings; in particular, a few minutes into the song, there is a passage heavily reminiscent of 2000s Mastodon at their more expansive and proggy, while later on, an almost uplifting guitar tremolo threatens to allow some light to break through the darkness smothering Thermoclines. However, these moments are insufficient to balance out the general doomy bleakness of “XXXIII”.

Beyond this opening track, Thermoclines remains generally malevolent, but represents this in different forms. Sludge has well-known ties to hardcore, and these come out clearly in “Kabuki”; arguably, the frenetic opening of this track is less hardcore and more mathcore, given its percussive, rhythmic nature. While this song slows down later on, that hardcore malice persists throughout; in doing so, it represents the bulk of the hardcore presence on Thermoclines, as such sounds only briefly cameo on the other tracks. The title track goes in yet another different direction by taking cues from some of the more subdued noise rock bands (particularly in the more spoken/shouted vocal approach), while also bringing back Mastodon influence in the guitars. “Schism” breaks the trend by not really bringing any new styles to the table; however, it makes up for it by offering the most effective portrayal of the previously introduced sounds heard outside of “XXXIII”.

Do you like your sludge to be menacing, dynamic while still remaining uncompromising, and representative of the range of sounds that harbor ties with the genre? If so, Valve have produced a compact yet wide-ranging release that manages to offer all of these, and does a fairly solid job at translating all this promise into a satisfying final product. Without being the finest sludge album I’ve heard in 2022, Thermoclines delivers what an album in the genre needs to, and does it well.

Written on 21.11.2022 by
musclassia
Hey chief let's talk why not
More reviews by musclassia ››