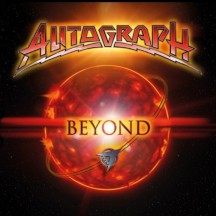 
Beyond life and death.

Okay people, time for some honesty: how many of you clicked on this review expecting a burial? Come on, hands up, I'm just as guilty. I expected to hear a band go through their last rites; instead I got something of a resurrection, flabbering my gast in the process.

Having reviewed Sign In Please many moons ago, I never thought I'd come across the opportunity to review a new record by Autograph; I wasn't even certain they were an active band at that point but hey, I saw Beyond was up for release and decided to get my glam on.

If you were expecting a tired, romp through glory days that have long faded into the past, then prepare to be knocked off balance by opener "This Ain't The Place I Wanna Be", which kicks off the coffin lid and bursts back to life like a zombie re-animated by Red Bull. The following "Your Slave Tonight" certainly shook me from the idea that I was going to be a connoisseur of crap; in fact, I began to think I had stumbled across a lesser known gem.

While the initial shock does wear off as the album goes on, it doesn't see the band dive back into the grave; instead it settles into an ok, if not as fantastic, rhythm punctuated with occasional surprises. "Gotta Getcha" showcases one of Beyond's strengths; enjoyable guitar work weaves through every track, with a big cherry on top in overdriven and flashy guitar solos that inject a heaping dose of glam into otherwise hard rock tracks (also see "Run For Your Life", "Feels So Good" and "Love Is A Double Edged Sword"): a simple yet effective trick.

While not earth-shattering, Daniels is a decent singer and one that breathes energy and passion into the tracks. How often are new albums by old bands damaged by having a tired and worn out vocalist phoning it in? His vocals on the likes of "Beautiful Disaster" ensure the track doesn't bottom out. Newcomer Jimi Bell is not short of riffs or licks, which he peppers generously throughout the album.

The problem with Beyond is that the one trick pony tires itself out by the time this 55-minute album draws to a close. Once the initial charm wears off and the songwriting wears thin, you begin to notice the repetitive nature of the album ("Feels So Good" feels like a photocopy of an earlier track). There are also songs that shouldn't have left the jam room; "Everything" and "Heart Of Stone" have the quality of a band's first demo rather than a group with over two decades of experience under their belts.

It might not set the world alight, but Autograph do manage to overcome any preconceived notions of mediocrity, instead evoking surprise and enjoyment with some decent music. While Beyond could benefit from the 'less is more' approach, it's a good effort for a band many thought to be left in the past.

Written on 29.11.2022 by
omne metallum
Just because I don't care doesn't mean I'm not listening.
More reviews by omne metallum ››